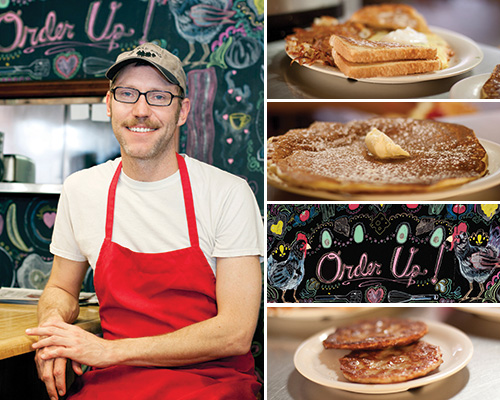 Amid all of the funky and fun pubs and eateries on Madison’s east side, Willalby’s Cafe stands out as one of Williamson Street’s top eclectic treasures. I went there to hang out with owner Nate Prince on a recent, balmy spring day. Despite the bright midday sunlight that was literally blinding, inside Willalby’s it could have been 10 a.m. or 10 p.m. The funktified high-luster lacquer of the knotty pine paneling, red, vinyl-topped spinning counter seats, and old-school booths all suggest years gone by and also that new hipster vibe that practically oozes out of the cracks.

And then there’s the “unicorn corner” (or unicorner as the staff refers to it) that Nate put up by the service window. Now I’ve seen some top unicorn art in my day, but Nate’s understated collection really gives you something to talk about while sipping hot diner coffee and devouring pancakes. “It [unicorn art] just sort of happened; it really wasn’t planned or anything,” Prince stated demurely. I don’t know—where I come from, that kind of unicorn homage rarely just happens.

Like many Madisonians, Nate pursued a classic education suited perfectly to the service industry: he was a geography major. (I get it—I’m personal chef who was a business comm major with an English minor). Any hoots, as he was telling me his story and the story of Willalby’s, it was obvious that the world of geography missed out on a solid catch. Nate had been cooking there for 10+ years (one day a week for extra fun money) well before he was approached by the former owner with an offer to buy the place in 2010.

“It was crazy. She offered me the restaurant in May, and I owned it by mid-July!” Nate told me. “I had to work days and then also late nights on the weekends for a while to pay off the note!” Eventually the late nights became a thing of the past (a sad day for many of us because going there after 11 guaranteed both excellent food and people-watching). These days, Willalby’s is strictly a breakfast joint (6 a.m.–2 p.m. during the week and 7 a.m.–3 p.m. on the weekend).

So after taking the reins of Willalby’s, Nate took the menu and really made it his own. I love the waffles, but Nate tells me I need to try the banana-walnut pancakes. His own personal favorite is the Fair Oaks Skillet. Word has it that the Hart’s Content Omelet (no idea who Hart is) is more than noteworthy, and my wife loves the Bomblet Omelet. Several good vegan options are also on offer, including a killer French toast. I also consider myself to be a bit of a connoisseur of diner coffee, and Willalby’s delivers.

The only thing I’ll warn our readers of is that if you come in on Saturday or Sunday mornings, you’ll sometimes experience a bit of a wait for your food to arrive (think very small staff). We like to think of it as a funky, family outing—bringing along a paper (yes an actual newspaper for sharing) and catching up with one another. So if life finds you on Madison’s East Side, check out Nate and Willalby’s. Not a hipster? Doesn’t matter. Willalby’s is a quintessential come-as-you-are place—no full beards or retro ‘80s neon specs required. What is required, however, is cold, hard cash (no plastic accepted). Hope we see you there sometime.