The Face of Commitment 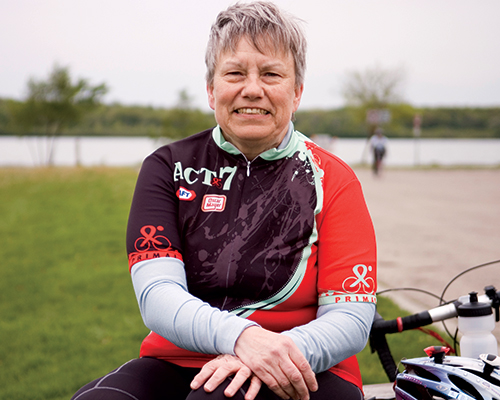 AIDS is not a gay disease, but a human disease, affecting more and more women every year. For that reason and in honor of so many good friends who live with HIV, I will keep riding until AIDS is over or I am.

Growing up in a household where homosexuality was either not discussed or at best misunderstood, I have been on an evolutionary journey for many years toward a clearer understanding of the diversity of my fellow human beings. I can’t say that I was aware of many of the early significant events as members of the LGBT community sought to be recognized as equal members of society in the first two decades after Stonewall.

Twenty years ago that all changed with a trip to New York City for a running event. On the Sunday morning of that trip in June of 1989, I watched with amazement as Riverside Church’s delegation walked out of the sanctuary to join the Gay Pride march. My best friend and I followed the parade from Times Square to Greenwich Village. Amazingly, I was in New York for the twentieth anniversary of Stonewall! Although I didn’t fully comprehend the significance of that day, in my heart I know that is when my life changed in a significant and positive way.

In 1991, I learned that a former coworker had died of AIDS. Unfortunately, I did not stay in touch with Ken after he moved to Washington, DC, and started a different job. Learning of his death at age 36 hit me pretty hard. His personality was such a bright spot in our office—he was so helpful and warm toward all employees. Ken grew up near Waupun on a dairy farm and had been a dairy herd manager in Florida before returning to Wisconsin. My participation in ARCW AIDS Walks in the 1990s and later the ACT Ride, the Wisconsin AIDS Ride, grew out of a need to help those living with HIV/AIDS in Ken’s memory.

I joined First Congregational Church in 1995 because I wanted a Christian congregation that welcomed and supported the LGBT community. A year later, I joined a delegation from the church that spent several days in DC to view the last time the full AIDS Quilt was displayed. During that trip I learned that Ken had a quilt panel. I was so happy that he was remembered in this way. On the last day, we found a note thanking us for all the signs we had put in the windows of our van. The individual who wrote that message has become a member of First Congregational and a good friend of mine. Now I ride for him as well as Ken.

While being just a rider for two years, I learned that the Ride community enhanced my life with friends, presented an opportunity to become a better rider, and created a common goal which makes life on the ride very unique. When I made the decision to ride for the third time, I also decided that I should start giving back to this wonderful community. I thought the best way to give back was to help other riders prepare for the ride by leading training rides and to raise as much money as possible so friends who live with HIV/AIDS will have access to AIDS Network services. I really love helping new riders learn to ride their bikes more efficiently, so they can actually enjoy riding 300 miles.

Over the last four years, it has been a life-changing experience to organize all the training rides and help plan as a member of the steering committee. Each year, I still worry if everyone is getting in enough training and whether we have enough rides with hills like those on the Ride. Then at the end of the summer, once more I witness how much difference a supportive community can make. It is so much fun to see those first-time riders going up and down the hills because they believe in the cause and themselves.

Each summer, I look forward to decorating my helmet with a cow. The cow represents several things to me: it is a thank you to the dairy farmers of Wisconsin who have provided my employment for 30 years; it reminds me that we have great roads to ride on because of the dairy farms; and it is a very special way to remember that Wisconsin farm boy in whose memory I ride. With a cow on my helmet, I will keep riding until AIDS is over or I am over.