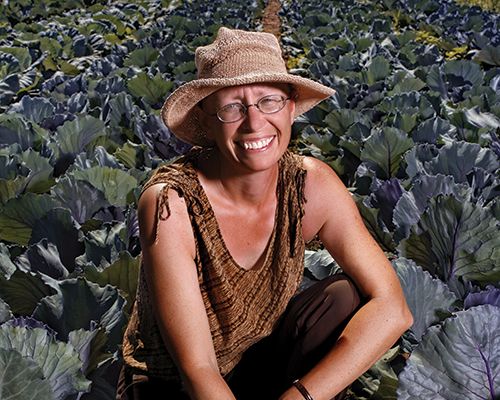 One of the things I like most about farming is that the particulars of what I do each day change dramatically throughout the year. It is easy to imagine a vegetable grower hoeing long rows of beans or harvesting onions, and I love doing those things. But I also really enjoy some of the more hidden parts of farming like writing a CSA newsletter, teaching a group of interns about the importance of cover crops, or planning a new tomato trellising trial. One of the basic tenets of organic vegetable production is that biodiversity can improve farm health and productivity. It can boost fertility, reduce diseases, stymie weeds, and frustrate insect pests—all of which makes the farm function more smoothly. Similarly, I find that diversity in the demands of my work helps to keep me healthy and productive and whole.

When I first started farming in 1992, I had just graduated from Wellesley College with a degree in philosophy and women’s studies. Though I enjoyed school, I did not get much hands-on learning in areas that directly impacted my bodily survival—like feeding myself. I learned to think critically, express my opinions, and eventually how to finish my assignments before the last minute—all valuable skills.

At the time, I thought I would just spend a summer or two working with my body, learning to use it and feed it in ways I had not before. Then I would go back to school. I never expected to become a farmer. One of the most important things I learned that summer was that I truly liked to work in the sun (and plenty of rain that year as well), even with blisters and sore muscles. I also learned that being a good farmer involves plenty of careful thought and study. When growing over 40 different types of vegetables, knowing and coordinating the particular needs of all those crops is not something you can just manage on the fly.

Once I realized that I might want to keep on farming for longer than I first anticipated, I decided that it would be important for me to work on a farm owned and run by women. Though I learned a great deal from that first farm I worked on and from Tim, the farmer, I also knew that many people would think me less capable as a farmer because I am a woman. I wanted to run the rototiller and load the delivery truck and do all the things that are required to run a farm, not just the things for which women are thought to be best suited. So, I moved to Wisconsin to work with Tricia Bross at Luna Circle Farm. Tricia and I worked together for four years. We started a CSA together, we built a straw bale house together, and we developed the farm business together. It was with Tricia that I learned not just how to grow food but also how to do it as a business from which you can earn a living.

After Luna Circle I worked in various other jobs, including managing a produce department in a natural foods store, working as an HR manager in a different natural food store, and working for a season for a traditional landscaper installing and maintaining ornamental gardens.

I also spent six months studying and apprenticing at the Farm and Garden at UC-Santa Cruz. All these experiences taught me skills that I use regularly in my current position as the Farm Director for Troy Community Farm and Community GroundWorks. Farming is not just about growing food. It is also about managing and teaching people in the field, experimenting with and evaluating new systems, fixing equipment, planning and organizing, and keeping records, not to mention pricing and marketing. As a farmer, I get to work on all those things, all to the end of providing the most nutritious and delicious food to my community that I can.

I was hired to start Troy Community Farm in May of 2001. Those first years were spent clearing brush and preparing the soil for production while also gathering CSA members and establishing some basic infrastructure. In 2002, we served our first 14 CSA members. In 2012 we will serve over 160, as well as our on-site farm stand and a number of Madison grocery stores and restaurants. Though we still grow food on only three of our five farm acres each year, our business has changed and grown dramatically.

One of the most important points in our farm history came in 2008.

And in 2008 when the price of oil and heat and even food began to skyrocket, it felt like I needed to do something to prepare for the post-peak decline.

So, we made two important decisions at the farm. First, influenced by Richard Heinberg’s article “Fifty Million Farmers,” we decided to expand and improve our farm internship program. In his article, Heinberg argues that if we are going to feed ourselves in a world where we have less oil to run tractors, transport food, and make fertilizers and pesticides, then we are going to need more farmers growing more intensively closer to our centers of population. I had always had interns on the farm, but in 2008 I decided to really take on intern education as a main focus. I added a series of formal classes, weekly field tours, and a second-year intern tack that vastly expanded the concepts and variety of work that interns are exposed to each year. Our goal with the program is to give interns a solid foundation in organic agriculture with an emphasis on hand tools, reduced off-farm inputs, and of course intensive production in an urban setting where land is limited.

The second decision was to build a passive solar greenhouse at Troy Gardens. Ever since the farm started, we had been growing transplants in a small hoophouse in my backyard. We needed to build some kind of greenhouse at Troy, and it seemed natural that we would build a typical structure with gas heat and automated fans and any other amenities we could afford. But with this concept of peak oil in the back of my mind, I began to wonder if we should instead build an alternative greenhouse that would rely primarily on the sun. It was easier said than done, but in 2011 we grew our first transplants in our new unheated greenhouse. In fact, we grew more transplants than we ever had before. It took a different level of skill and a fair bit more work, but in the end the plants looked good. We even held our first annual plant sale and sold thousands of extra plants that we grew without the use of fossil fuel heat.

Now most all the decisions we make on the farm are influenced by our belief that in order to be successful and sustainable in the long term, we must reduce our reliance on off-farm inputs including fossil fuels. We do most everything on the by hand. We transplant and weed and harvest all with our hands. We grow our own fertility with many different cover crops; and we are even exploring growing our own mulch.

As winter—the season of planning and setting up crop trials and developing classes—comes to an end, I am looking forward to getting back out into the field. Another great thing about farming is that every year I get to start fresh. I get another chance to grow the best melons my members have ever tasted. I get another shot at pulling out all our weeds before they go to seed and make more babies for the next year. And I get a whole new crew of interns who are excited about growing food and whom I might both inspire and equip to actually become farmers. One of the things that I hope to convey every year is that while farming can be difficult in many ways, nothing else can compare in terms of the joy and satisfaction that come from being able to feed yourself and your community.