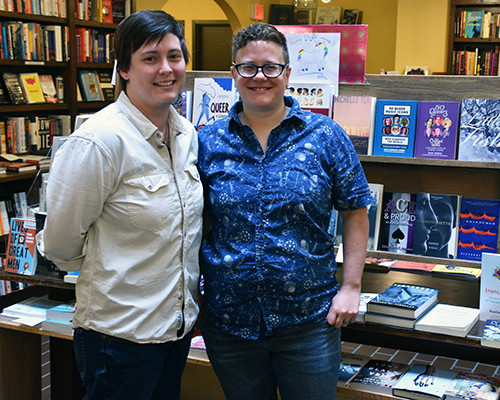 The city’s long-running feminist bookstore, A Room of One’s Own, will officially change hands come July 1 as two employees step in to co-own and manage the business. Gretchen Treu has worked at the shop for 11 years, and Jess Lukes for just over 6. Current owners Sandi Torkildson and Nancy Geary will stay on during a transition period to assist with the handover of the business.

Internationally acclaimed fantasy novelist Patrick Rothfuss, who lives in Stevens Point, will become a silent partner in the enterprise. Treu says the two have been friendly since meeting several years ago at WisCon, a feminist science fiction and fantasy convention held annually in Madison. “He came down to do an event and we were selling books for it, and I asked him to sign stock for it, so we were hanging out while he signed a bunch of books. This was actually the weekend before the Donald Trump election. He was like, ‘You know, let’s not be too Midwestern about this, let’s see how we can make this work. This is a great store, and I want to support a progressive place.’”

Treu has been involved in running many of the shop’s events over the last decade, and Lukes joined the team after working at Avol’s Bookstore, which Room took over when it moved into the larger space, formerly occupied by Canterbury Books, in 2011. For Lukes, it’s a gratifying outcome to a winding journey: After graduating from UW Whitewater with degrees in Women’s Studies and Art, Lukes says coming to Madison and getting a job at the feminist bookstore was a major goal. Lukes’ first application was (“Very nicely!”) rejected, but things have since more than worked out.

Room of One’s Own was founded in 1975 by five women — including Torkildson — as a feminist bookstore, but evolved into a full-service bookstore.

“Sandi and Nancy have built a strong, wonderful, robust store and we’re not here to mess with that,” says Treu. “We’re dedicated to keeping the feminist roots of the store going, and becoming more intersectional, and we do that in kind of low-key ways now. Whenever I do a display, there’s no reason we should ever do a display that doesn’t have people of color in it, or trans people, etc.”

They’ll continue working in concert with the Wisconsin Book Festival, for instance, which helps leverage bigger name authors and events. Treu notes making a habit of urging publishers to have authors stop in Madison while on tour through cities like Chicago and Minneapolis. “We’re a great rest stop!” Lukes adds with a laugh.

Both Lukes and Treu agree that, especially in light of the election of Donald Trump, Room’s intersectional feminist, queer space is needed more than ever.

“People can walk in the door and feel comfortable in this space, not just in their home while online,” notes Treu. “Not to discredit being able to gather online, but there’s something to being able to have this place in our community and to interact face-to-face with people who will, you know, treat you like a human being.”

As for the business itself, Treu says things having been going especially well since the move into the larger space. “Borders closing helped us in some ways – R.I.P. Borders, I guess,” although the prophesied e-book apocalypse never quite materialized, either. Treu says that Room offers e-book and audiobook downloads through the website, but sales overall have leveled off. “People who know they’re going to be e-book people know that. It’s just part of our community, we want to have this physical space, and people still want books. We also have used books, which are really important for accessibility for low income folks, and being part of a healthy book market that keeps books flowing through the community.”

Since the official announcement of the sale and ownership transition was made through Room’s newsletter and other outlets, both Treu and Lukes say they’ve received an outpouring if support and gratitude – “sighs of relief” – from the community. They’re thrilled to help continue on the 43-year-old bookstore’s life, not just for Madison, but as part of an ever-shrinking network of independent booksellers and feminist, queer-forward community spaces.

“For me personally that’s one of the most rewarding things about this,” says Lukes. “Being part of the queer community and being one of those places where queer kids come in and say, ‘Oh you have asexual flags, and you have bisexual stickers!’ Or people thanking us for having more books in a certain section or having more diversity. We know we have a niche market, and it’s important. Even our kids LGBT section–someone says they need a book that can help a 4 year old understand gender and, it’s like, we can do that. We’ve got that.”