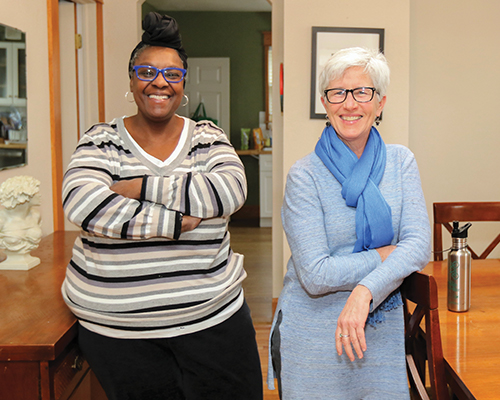 Every culture has a water story, and Ann Brummitt and Brenda Coley are on a mission to rewrite Milwaukee’s narrative.

The two women are co-directors of the Milwaukee Water Commons, a non-profit with a vision to create a “model water city” by fostering a sense of connection to and shared responsibility for Milwaukee’s lakes, rivers, and other watersheds.

Brummitt and Alexa Bradley co-founded Milwaukee Water Commons in 2012 when they learned that local business leaders were touting Milwaukee as a “global water city.” In the late 2000s, leaders claimed that the number of firms dedicated to water technology in Milwaukee and its proximity to Lake Michigan could turn the city into “The Silicon Valley of Water.” This declaration sparked anxiety in local environmental circles.

“We are not really a water city because we’ve got pollution. We’ve got invasive (species) and all of these problems,” Brummitt said.

Brummitt and Bradley interviewed 1,500 people to answer the question of what it would truly mean for Milwaukee to live up to the “global water city” moniker.

“If we are going to be a model water city, then we need to have clean water. We can’t be a city where our children have never been to Lake Michigan and don’t know how to swim. We should be a leader in green infrastructure and employing people in the water sector,” Brummitt said.

Since its founding, Milwaukee Water Commons has grown into a citywide network. The organization’s six-point “Water City” agenda focuses on improving the quality of the city’s waterways and drinking water, strengthening community ties to water through education, arts, and recreation, and tackling Milwaukee’s high unemployment rate by encouraging employers, city officials, and other community partners to hire local people to update Milwaukee’s aging water infrastructure.

Neither Brummitt nor Coley, who joined MWC in 2015, started their careers in environmental justice. However, both realized a disconnect between people and the planet. The disconnect is pronounced in Milwaukee, where lack of access and faith in the city’s leadership create barriers for Black people to develop strong connections to their water.

“We don’t have to convince anyone that water needs protection because we are water,” Coley said. “People are disengaged from it through no fault of their own. Access is limited. You can’t get into the water. These spaces are usually seen as white spaces.

“We can’t expect people to take care of the water if they only use it as a resource. You want people to engage in the spiritual…we engage people in those water stories.”

A cryptosporidiosis outbreak in Milwaukee in 1993 was the largest documented waterborne disease crisis in the nation’s history. This past January, Milwaukee’s health commissioner resigned after his office failed to notify thousands of families that their young children had elevated levels of lead in their blood.

“People don’t have a lot of faith in the government. We’ve been drinking bottled water for a long time,” Coley said.

“These lead laterals are in old housing stock. People of color, and disadvantaged and vulnerable populations are affected. We have 70,000 lead laterals to replace, and at the pace (the city) is going, it will take 50 to 100 years. MWC thinks it can be done in a generation. In the meantime, we need water filters. We can’t afford for our young people, pregnant women—any of us, really—to be poisoned by lead.”

MWC is working to build community-based power by creating a diverse movement of water leaders in the city. Brummitt said she takes pride in focusing MWC’s work exclusively on environmental justice and bringing together people from all corners of the city.

“We’ve got to do things differently. The first step is to have different people at the table,” Brummitt said.

The commitment to diversity is what prompted Coley to join the staff as MWC’s community engagement coordinator. She was promoted to co-director a few months later when Bradley stepped down.

“I was surprised to walk into the room and see these people around the table. There were people of color. It was all women. I knew when I walked into that room that this was something special.”

When she started, Coley managed one of MWC’s flagship programs, Water School, where community members learn about issues affecting their watershed and organize a project to mitigate them.

One hundred people have gone through Water School, with over 500 community members benefiting from their projects. Groups have gone on to reclaim rainwater for community gardens, build irrigation and aquaponics systems, and organize public awareness campaigns around reducing consumption of bottled water.

“We have a Commons Philosophy. We are trying to engage all people in all aspects of water, not just education and recreation, but green infrastructure, arts, and advocacy,” Coley said.

“We want to engage different voices in policy, education, and culture around water. For us, in a way, we’re really trying to do some racial healing, and that’s what the water can do.”

Water School was a venue for healing between Lake Edge Lutheran Church, near Lake Michigan on Milwaukee’s east side, and Alice’s Garden in the city’s center. Although five miles can mean a world of difference in one of America’s most segregated cities, the two communities bonded over their shared water source.

“They come from an African-American neighborhood and a white neighborhood, but they realized they were part of the same watershed. This is an example of one of these mantras that we say, ‘We heal the water, the water can heal us,’” Brummitt said.

Alice’s Garden and Lake Edge Lutheran organized a “watershed walk.” The two communities traversed the five miles dividing them, including a trip to the Milwaukee River, where they get their water.

“For a lot of people, it was the first time they’d ever seen the Milwaukee River. That is just one way we can bring people together around the water,” Brummitt said.

“We like to teach people about watersheds. Watersheds don’t observe political or ethnic boundaries. It’s kind of a metaphor that people can grab onto for ways to heal the city.” 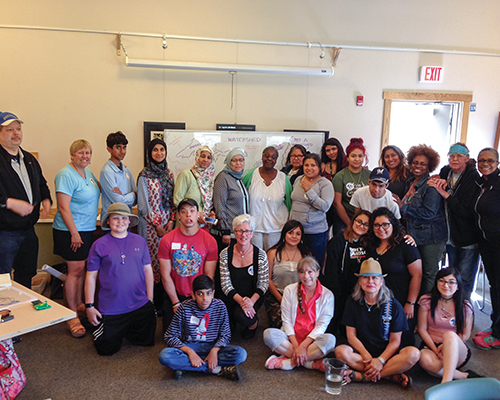 MWC’s commitment to diversity and inclusion in the environmental sector is garnering national recognition. In 2017, they received a $50,000 grant from the Joyce Foundation. They also partner with other water advocacy groups throughout the Great Lakes region.

MWC is in partnership with the Milwaukee Metropolitan Sewerage District and the U.S. Water Alliance to facilitate a water equity task force. Currentlying, MWC is commissioning the University of Wisconsin-Milwaukee to complete an assessment of “blue green job” needs in the city. The task force will bring together workforce development, city officials, and community organizations to collaborate on “blue green” jobs creation. The team will work to define what the “blue green” job sector looks like in Milwaukee.

“The Milwaukee Metropolitan Sewerage District’s goal is to capture 740 million gallons of rainfall. That’s a half inch for every rain event. To do that, they are going to have to transform what Milwaukee looks like. We need green infrastructure. That is more than just pipes. We need bioswales, we need porous pavement, we need rain barrels, we need rooftop gardens. Those are all jobs,” Brummitt said.

“We can make some institutional change,” Coley said.

“We can transform the way unemployed, underemployed, and people of color get these water jobs that we know are on the horizon. If we can transform how that happens and make sure that it’s fair and equitable, then that’s our job.”

More voices at the table

For Coley, an African-American bisexual woman, and Brummitt, a white lesbian, being LGBTQ+ cannot be removed from the social justice aspects of their work.

“I don’t really like identity politics. It’s a slippery slope. But because of discrimination that is visited upon people, because that discrimination goes so far as to cause health disparities, it’s important to our survival to step fully into ourselves,” Coley said.

“We are often asked to fragment our identity, choose one over the other, minimize one part of ourselves to lift up another. But for me there is no fragmentation. I am 100% a woman, 100% bisexual, and 100% African American.”

Brummitt challenged the rest of the environmental movement to see diversity as an asset.

“I agree that our LGBTQ+ identity is important in that we (LGBTQ+ people) be seen in the fullness of our lives,” Brummitt said.

“Likewise, it is time for the environmental movement to embrace that fullness to the extent that we welcome everyone to the table—straight, gay, rich, poor, white, black, brown. When we do that, we will wind up with better solutions.”

Learn more about the Milwaukee Water Commons, and what you can do to get involved, at milwaukeewatercommons.org.