We’ve Been Here All Along

Gay people have always existed, but our stories and our pasts are often obscured by bias, ignorance, and the passage of time. What we do have is largely focused on coastal cities and people—New York and San Francisco, maybe a little from Chicago. But LGBTQ history is, of course, everywhere, and historian Dick Wagner is out to set the record… well, not straight, exactly. Fuller. Richer. More Midwestern.

The longtime Our Lives contributor has penned a two-volume history of gay life in Wisconsin, the first of which—We’ve Been Here All Along: Wisconsin’s Early Gay History—is out now. The volume focuses predominantly on gay and lesbian people in the state from the late 1800s through the Stonewall Riots of 1969. The second volume, due out next year, will cover 1970 to the present. Wagner celebrated with a book release party and reading, sponsored by the Wisconsin Book Festival, in late June at the Madison Public Library.

Prior to that, I sat down with him to chat about what finally pushed him to dive in and write a full-length work. Wagner has been researching and sharing stories of local gay history with our readers since the early days of this magazine. It was that experience, plus some strong encouragement from friends, that pushed him to collect it all in one place. 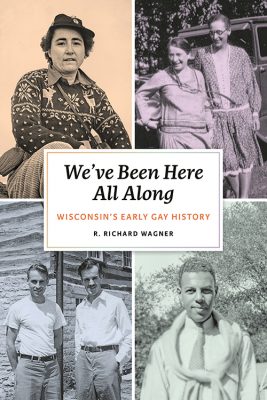 “I have to give credit to Patrick for encouraging me to write for Our Lives because that sort of proved to me that one guy could write up this stuff and make it interesting, and that there was some kind of market for it, that people were interested,” Wagner says.

It all started with an estate sale down the block from Wagner’s home on Madison’s near east side. It was the 1970s, and a friend tipped him off to the presence of a veritable treasure trove of vintage gay erotica (“physical culture”) in a trunk in a widow’s attic. The purchase of the collection began his own quest to archive LGBTQ ephemera, something that eventually filled his basement with boxes of items that included everything from early gay newsletters to photographs, show programs, and more. He’s since passed off much of it to the LGBT Archives at the UW for safekeeping.

Wagner had long been interested in history. He moved to Madison in 1965 to pursue his Masters and eventually PhD in U.S. History at the UW. It was there, too, that he got involved researching and writing his dissertation on a group of progressive reformers who were working to get rid of all the red-light districts in the U.S.—something that tended to directly target what few establishments and services catered to gay people.

Bit by bit, Wagner’s own awareness of gay life and activism began to grow. What had been research on so-called sexual deviance in the stacks at UW’s libraries eventually lead him to hidden works about homosexuality. Up to that point, given the era, he was “in total ignorance” of anything to do with gay community.

Of course, as it turned out, it was flourishing—just hidden. Wagner’s new book sheds a bright new light on what what was once obscured, providing a long-overdue and much-needed understanding of early gay life in Wisconsin.

In 2016, Wagner invited his neighbors over for a get together and discovered that one was an editor with the Wisconsin Historical Society Press. He urged Wagner to put together a proposal for the book, to coincide with the 50th anniversary of Stonewall.

“That lit a fire,” he notes. “I was amazed at the amount of pre-Stonewall material I found.”

Drawing from past Our Lives columns and extensive research, Wagner has put together a compelling look at the thriving communities created, under the radar, during the early part of the twentieth century.

That includes, of course, the famous Pendarvis House and restaurant in Mineral Point, run by life partners Robert Neal and Edgar Hellum from 1935 to 1970. It also includes the Layton School of Art in Milwaukee, founded in 1920 by couple Charlotte Partridge and Miriam Frink, who lived together—remarkably openly—for much of their lives.

Perhaps most fascinating are the records from Waupaun Prison, which provide a decidedly slanted but important view of homosexuality in more rural parts of the state. Wagner says digging through the highly detailed accounts of men convicted of “sodomy” shows an extensive network of gay men living in places like Oshkosh and Rhinelander. Thanks to the efforts of a researcher at the time, many of the records are the personal, first-person narratives written by the men themselves, providing a rare glimpse of gay life at the time.

“So much of our life and history has been erased, to actually find it and hear their voices and their words, is to me just really exciting,” Wagner notes.

The material skews heavily toward gay men, but there are records of the lives lived by same-sex-loving women, too.

“In ’39 the police chief reported an ‘unusual case’ that involved two women who were arrested,” he says. “It was especially unusual because the sodomy statutes—which came straight out of Tudor England—said there had to be a ‘male organ’ involved in order for it to be sodomy. So there was some oppression against lesbians but it’s less documented.”

Though much of our LGBTQ history is lost to time and oppression, it’s heartening to read even a piece of our rich history, carved out tooth-and-nail by those who came before, and compiled and preserved for future generations by dedicated historians like Wagner. 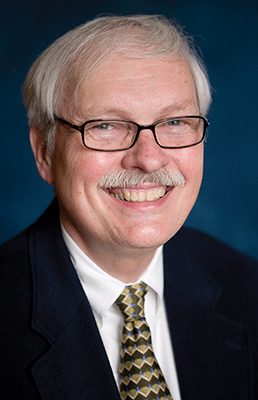 Madison’s premier roller derby league, Madison Roller Derby, is thrilled to announce their return to public games after a long pandemic pause. The first opportunity for the public to cheer on MRD’s four home teams comes on Saturday, December 10, with a double-header...

Most Likely to Succeed

Frederick Harris, MA, MA, LPC, SAC, CCTP, discusses the exhausting reality experienced by those who are the first to enter spaces that are not prepared to receive them and how that brought him to create a space for healing.

On Tuesday, November 29, 2022, the Senate passed legislation known as the Respect for Marriage Act in a bipartisan vote of 61-36, nine days after a mass shooting at an LGBTQ club in Colorado and almost exactly five months since the Dobbs Decision called into question...

On Wednesday the 23rd of November, 2022, a judge with the Dane County Circuit Court dismissed a case that would have changed the policy of Madison Metropolitan School District to one that forces teachers and staff to disclose a student’s change in pronouns or names to...

As a celebration of two-and-a-half decades of continued musical excellence, Perfect Harmony Chorus is proud to present its 25th anniversary concert, “Shining in Silver.” In a weekend of reflection and jubilation, Madison’s premiere LGBTQ+ chorus will draw upon the...

Tori Freund, midwife-in-training J. Dale Gardner, and Lexy Ware seek to provide inclusive, affirming support and full-spectrum care for people through their pregnancy and birth or abortion experience—and beyond.

The Professional is Personal