What’s a Mother To Do? 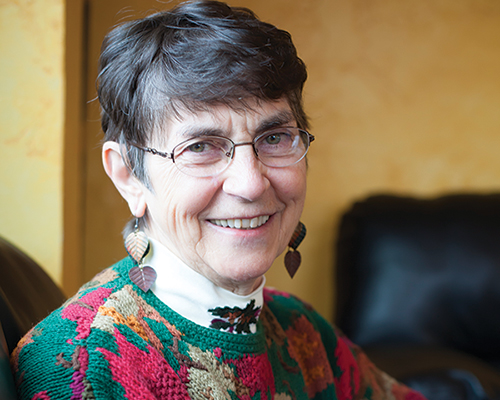 Having been educated in the field of teaching, when I became a mother, I watched with great interest as my sons developed from babies to pre-adolescents. I accompanied a group of sixth graders to a “Problem Solving” event on the campus of Coe College in Iowa. While there and observing these six kids, I remember asking their coach how you would know if your child was gay. She said she had no idea. Seven years later, I received a letter from my son who was attending MIT in Boston. He had managed to get the words on paper stating that he was gay. As I sat on the edge of the bed with his letter in my hand, I recalled that earlier question to his teacher. What had I seen? How does a mother know?

One thing a mother knows is that she wants her children to grow up safe and happy. I was unaware of how to help make that happen for gay kids. I told my son that I wasn’t a public speaker like Judy Shepherd, but asked him if there something else I could do. He told me to check out the Gay, Lesbian, and Straight Education Network and Parents, Families, and Friends of Lesbians and Gays. I began attending PFLAG, and now I have served six years as the treasurer, four years as president-elect and president, and am now beginning my two-year term as past president. My main goal was to partner with schools, becoming a visual presence in the communities surrounding Madison.

One Step Forward, One Step Back

My favorite cartoon shows a gay couple walking down the aisle at their wedding, and one guest leans over to whisper to another, “I just love gay weddings, but the processional takes SO long, with two steps forward and then some back.”

This year, we’ve experienced some great steps forward with the repeal of “Don’t Ask, Don’t Tell” and, for the first time ever, a major political party including marriage equality in their party platform. However, when PFLAG is required to cover up the words “gay” and “lesbian” on their banner in order to walk down the main street of a community 10 miles outside of Madison, we know we have work to do in our surrounding cities and towns.

Two years ago, PFLAG, in partnership with the Gay/Straight Alliance of Stoughton High School, entered a float in the community celebration of Syttende Mai. A step forward. The only way our application was found acceptable was if we would agree to cover the words “gay and lesbian” on our banner. So, to get our foot in the door, I reluctantly agreed to do this. For that parade, our banner just said “Parents and Friends,” followed by a strip of rainbow paper. A step back.

This year, our high school students were not available to participate in this parade because of conflicting sporting events. I know in my heart, however, that this is also a way of covering the fact that many of them are still not comfortable in their own town as “out” individuals. PFLAG decided not to apply to be in the parade if the students could not participate. It is the Youth Parade, after all.

On Monday morning of the week of the parade, I received a call from the parade chair begging us to participate. A step forward. I explained the lack of students, but she really thought a walking entry would keep Stoughton moving forward. I scrambled at this late date to line up PFLAG members willing to march. When it is important, as always, eight members changed previously made plans so they could participate. When we arrived at the appointed parade entry, we were met with this same chair gasping for breath as she said, “You have not covered the words.” I told her we were not covering them. A flurry of phone calls to the event chair confirmed that we would not be allowed to participate. A step back.

We stood proudly with our banner on the sidewalk among many young couples with children. This group was aghast at what they had observed and heard from the chair. They encouraged us to participate anyway. As the entries went by, I noticed one that had a banner proclaiming “Inclusive Dream Park,” and I gave the signal to our members to join in behind this group. I spoke briefly with the leader as we jumped into the parade, and assured her we would not harm her efforts to raise funds. In fact, this project received hundreds of dollars of donations from supporters of PFLAG that they otherwise would not have received. A step forward.

The following week, I wrote a Letter to the Editor of the Stoughton Hub thanking the Inclusive Dream Park group for welcoming us when we had been bullied out of the parade. This letter generated a front-page article, photos, and many weeks of Letters to the Editor. What will next year bring? I spoke with the new event chair, and her committee is planning to develop a policy on parade participation. We’re waiting to see what it says.

In Places of Worship

We know we have work to do in our faith communities when an energetic young vice moderator of the General Assembly for the Presbyterian Church USA is pressured into resigning 36 hours after her election because she conducted ONE same-sex ceremony, in Washington, D.C., where it is legal. Rev. Tara Spuhler McCabe said that she was offended at the “divisive” and “poisonous” blogs and tweets she had received since her election, and she recognized this situation would get in the way of the General Assembly completing the work they set out to do. And so, she submitted her resignation. A step back.

And finally, this summer, my son, who teaches at the University of Georgia, called to give me some news before it went out on Facebook. He had always assured me that as a gay man, he was quite safe as long as he was on a university campus, even while living in the south. However, on this summer day his office door had been vandalized! He had displayed a political cartoon showing three flag-draped coffins, and the caption read, “Which one is the gay soldier?” The messages of hatred were clear. Someone had drawn an arrow pointing from the coffin to his nameplate.

This is when a mother’s passion burns to make a difference. My work in PFLAG continues to energize my efforts, and after receiving the Ally of the Year award from OutReach this year, I am pumped full of confidence. I intend to keep working for the LGBTQ community so that together, we can keep taking steps forward.