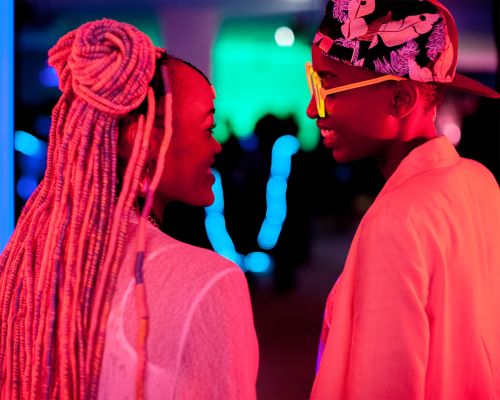 The Wisconsin Film Festival, Madison’s annual silver screen extravaganza, returns April 4 through 11 at venues across the city with more options for casual and zealous movie-goers alike than you could shake a clapperboard at.

As always, hundreds of titles spanning dozens of genres will draw eager filmmgoers from across the region. But of course what we most wanted to know was, where’s the gay stuff? With the help of festival staff, Our Lives has taken the liberty of compiling all of the offerings that also feature LGBTQ+ themes, characters, and/or creators.

We’re especially excited to see the award-winning lesbian-themed feature “Rafiki,” which was banned in its home country of Kenya for its frank portrayal of same-sex love. Authorities in that country briefly lifted their ban only so the film hold a 7-day run in theaters in order to qualify for consideration by the Oscars.

There’s also an intriguing looking Wisconsin-made film, “Pet Names,” that features realistic portrayals of young queer relationships and sensibilities, with a Milwaukee backdrop. The filmmakers are scheduled to attend, too.

Be sure to check out these films and more: Tickets and passes are on sale now.

A superlative look at young desire and heartbreak, Genesis perceptively traces the emerging love lives of two Montreal siblings. Guillaume is the smirking class clown of his boarding school, a natural performer who entertains his peers with impressions and pranks. In a parallel story, recent grad Charlotte dumps her boyfriend after an indecent proposal. Guillaume’s easy confidence hits a stumbling block when he develops feelings for his best friend, while Charlotte finds herself in a troubling situation after becoming involved with an older guy. Featuring excellent performances by its two up-and-coming leads and a knockout soundtrack, Genesis is quietly radical in relaying its universal tale, willing to go in whatever directions its heart takes it.

One of the most influential actors of his generation, Montgomery Clift was a magnetically moody presence in movies whose life ended tragically at age 45 in 1966. Rumors and legends about Monty’s life circulated widely in the decades after his death, primarily due to the publication of two salacious and popular biographies. More than fifty years after the iconic performer’s passing, his nephew, Robert Clift, has co-directed a revealing and personal examination of his uncle’s life and craft, researched from a large family archive of papers, photos, home movies, and, most significantly, recorded phone conversations between Monty and his brother, Brooks, Robert’s father. This myth-shattering documentary challenges long-held ideas about Monty’s preparedness as an actor, his level of openness about his homosexuality, and the state of his mental health after a traumatizing 1957 car accident.

Grad-school-dropout Leigh (Meredith Johnston) ducks out of Milwaukee, where she cares for her ailing mother, for a weekend camping trip with her ex (Rene Cruz). Mixed signals and power games follow suit, as the two awkwardly dredge up their past. With frank discussions of sex, desire, and heartbreak, this anti-romantic comedy foregrounds queer experience to a natural and refreshing degree. Handsomely shot and rife with small moments funny and true, Pet Names clinches Brandt’s reputation as one of Wisconsin’s most perceptive up-and-comers. Rounding out the talented cast is Goose (Chato), hands down the cutest and chubbiest pug on screens at the fest.

Kena spends her days skateboarding and hanging out with friends in her Nairobi neighborhood, as she waits on exam results to start nurse training. When charismatic, rainbow-haired Ziki catches Kena’s eye one afternoon, they quickly begin a tender, private romance that is complicated by their rival political families and prohibited by their conservative, religious environment. As Ziki and Kena grow closer, their parents, friends, and neighbors notice and react with rumors threatening the love and joy the young women find in each other. With its expressive cinematography and vivid settings and costumes, Rafiki portrays Ziki and Kena’s relationship with both realism and hope, grounded in the understated, beautiful performances of lead actresses Samantha Mugatsia and Sheila Munyiva. Director Wanuri Kahiu’s vibrant sophomore feature was Kenya’s first entry at the Cannes Film Festival, but it was banned in its home country for its positive representation of a same-sex romance.

In Secret Music, Pulitzer prize-winning composer David Del Tredici takes us step-by-step through the process that led to his transformative and uninhibited commitment to writing what he calls “gay music,” a repertoire that honors the joys and struggles of his life as a gay man, as well as of gay life, as he understands it. This clear-eyed and intimate documentary (by concert pianist and music theorist, Daniel Beliavsky) treats us to relaxed and expansive interviews with its subject. It also grants us front row seats when Del Tredici puts vocalists and Beliavsky through their paces as they rehearse some of his most provocative and challenging pieces, including a song derived from the ecstatically explicit Allen Ginsberg poem, “Please Master.” Secret Music is a rare glimpse of the work and thought that goes into art, a profound and revelatory experience for music lovers and the uninitiated alike.

In his third outing as director, Ralph Fiennes dramatically recreates the true story of Soviet ballet superstar Rudolf Nureyev and his defection to the West in 1961. As The White Crow begins, we find the 22-year-old Nureyev (played by professional dancer Oleg Ivenko) dressed in a black beret and a dark suit on a plane flying from St Petersburg to Paris. Nureyev, not yet the figure of legend he would become, is a member of the world-renowned Kirov Ballet Company, travelling for the first time outside the Soviet Union. Parisian life delights Nureyev and the young dancer, also a gay man, is eager to consume all the culture, art and music the dazzling city has to offer. This incredible journey by a unique artist will transform the world of ballet forever. Fiennes, who co-stars as Nureyev’s ballet master and mentor Alexander Pushkin, has made a movie that is “lovely, elegant…[with] a true-life East-meets-West intrigue to rival Cold War… the film’s many ballet scenes are stunning, to say the least” (Peter Debruge, Variety).