OutReach will not hold Pride parade in 2019, focus is on festival instead 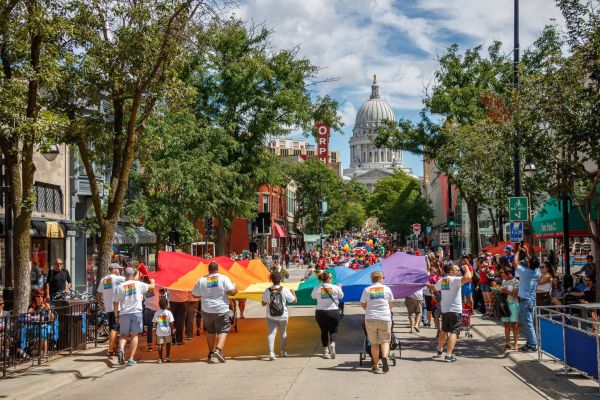 OutReach LGBT Community Center announced on Monday that the organization will not hold a Pride parade in Madison this August.

The decision comes after a tumultuous 2018 event that involved rescinding invites to law enforcement contingents in the parade after pushback from local activists, and an intense backlash to that decision from other parts of the community.

In a press release, the OutReach board says the decision to forgo the parade this year was a difficult one, but largely based on logistical hurdles placed by the city’s Street Use Division that made it nearly impossible to continue.

The goal instead will shift to holding the newly dubbed OutReach Magic Festival at Warner Park, on Sunday, August 18 to coincide with Woof’s King Street Pride Block Party the day before. The name is a nod to the MAGIC picnics held for years in Madison as the de facto Pride celebration.

OutReach also announced a new organizational mission statement: “A commitment to equity and quality of life for all LGBTQ+ people through community building, health and human services, and economic, social, and racial justice advocacy.” In the release, the board cites ongoing work with the Community Pride Coalition to better address social and racial justice issues within the LGBTQ+ community. They also apologize for “racist actions,” particularly during discussions around Pride last year.

“We take full responsibility for all our actions that silenced, erased, overlooked, and excluded our Queer, Transgender, and Intersex People of Color (QTIPOC) in the community, as well as the harm that we caused in these actions and in upholding white supremacy,” the statement reads. “We can’t promise that we won’t make mistakes in the future, but we ask our community to hold us accountable as we make efforts to educate ourselves, staff, volunteers, clients, and stakeholders, and continue to engage in community healing.”

They pledge to continue engaging with anti-racism work and intersectional feminism, as well as actively ensuring that OutReach’s events and services are accessible to all members of the community.

Complications around organizing for a 2019 parade arose as early as December 2018. OutReach Executive Director Steve Starkey told Our Lives that a series of changes and stipulations by the city quickly posed an impossible scenario.

Lt. Brian Chaney Austin, who had been the Madison Police Department’s representative on the Streets committee and is a gay man himself, was promoted and replaced by Lt. Dave McCaw. McCaw had been the liaison when OutReach first began holding the parade in 2014, and Starkey notes that the officer was not particularly LGBTQ friendly even then. This year, McCaw wanted to make major changes to the way MPD provides security to the event – changes that essentially made it fiscally impossible for an organization with a limited budget.

In previous years, Austin allowed officers to volunteer for special duty to cover security shifts (security is required by the city in order to hold such an event). Last year, 13 officers worked the parade. In previous years, that number had been as low as four. The total went up after the Pulse Nightclub mass shooting in Florida caused some to worry that LGBTQ-specific events might become targets, but no incidents were reported during any OutReach Pride.

For 2019, McCaw wanted to increase security to 40 officers and change it to a district event, a change that would have tripled the cost (officers are paid more for district versus special events), as well as assigning individuals rather than allowing them to volunteer. Starkey says the shift would have resulted in OutReach’s costs just for basic parade logistics going from approximately $5,000 to about $20-30,000.

The city has also recently begun limiting the total number of events it allows to happen downtown. Madison Metro and city traffic controllers argue that it’s too disruptive to have multiple street closures to accommodate parades down State Street. The Pride parade would not have been allowed down State unless it agreed to stop at the three lighted intersections, which Starkey argues would have caused the procession to become choppy and disorganized. The city would also have required a significant downsizing of participants in the parade itself, in order to “accommodate stopping at traffic lights and to reduce the use of State Street for staging.”

The city then told OutReach it couldn’t hold the event on August 18 because it was “too close” to the university’s move-in/move-out days. In previous years, however, the parade had been held at essentially the same distance from those dates without incident. Starkey is unsure what changed, but the requirement would have meant breaking up the major city Pride events by two weeks.

Starkey is doing his best to look on the bright side, though he understands the decision will be disappointing for many. A festival, he says, will cost significantly less and, he hopes, provide more of an opportunity for the different parts of the LGBTQ+ community to really come together and get to know one another.

“A parade doesn’t really foster an atmosphere where people are going to do a lot of meeting new people or have conversations,” Starkey says. “There’s a lot of division in the LGBT community because there’s so many different groups…we need to have a lot more interaction between those groups so that people aren’t just in their own little faction but reaching out and meeting more people, being more inclusive.”

Starkey says OutReach is focused on making a festival more diverse and inclusive of the various communities, with specific focus on young people, people of color, and the trans community. Live music, games, food carts, vendors, and more will be part of it.

He adds, “[I hope] this will be kind of a healing situation where the community can come together and start to build new relationships, build trust, and unity.”

He also hopes that, depending on potential changes in city leadership over time, this won’t be the end of Pride parades in Madison.

OutReach will be looking for volunteers to help with the festival itself. Keep an eye on their website and newsletter (www.lgbtoutreach.org) as more information becomes available. Individuals who want to help specifically with planning and organization can reach out directly to Angie Rehling at angier@lgbtoutreach.org.

Disclosure: Our Lives has been a media sponsor for past OutReach Pride events, though the two organizations are otherwise not affiliated.