Playwright L. Robert Westeen coming to Wisconsin to perform ‘Cocaine and Ethel Merman: The New Homo Guide’ as a Benefit for Proud Theater 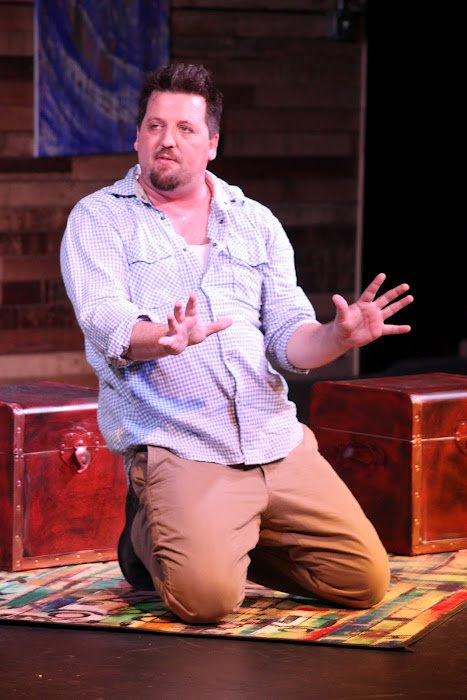 MADISON, Wisconsin – March 18, 2014 — Proud Theater is pleased to welcome playwright L. Robert Westeen back to Wisconsin for 4 showings of his hit one-person show ‘Cocaine and Ethel Merman: The New Homo Guide’, a humorous romp through the life of a man who spends an evening with a cocaine-addicted Ethel Merman female impersonator and ends up developing a new outlook on his own life, past and present.

The performances are being presented in Wisconsin April 2-5, 2014 as a benefit for Proud Theater – a Lesbian, Gay, Bisexual, Transgender, Queer/Questioning, Intersexed and Allied youth theater troupe (LGBTQIA) currently with 3 chapters around the state. Founded in 1999, Proud Theater encourages these youth to share their own stories of coming out and life through the creation of original theatrical works which they then present to the community at large throughout the school year.

‘Cocaine and Ethel Merman: The New Homo Guide’ was originally developed by Westeen – a Wausau, Wisconsin Native – as a performance piece about his own life in the hopes of inspiring a young friend in the process of coming out to find a place in the world.

‘[It] takes you down a rabbit hole and on a few rabbit trails,’ says Westeen of the show, “[and is] a study on living life to its fullest, never taking moments for granted, and being who you are no matter what others may think.”

The show was a finalist in the 2012 Houston Press ‘Houston Theater Awards’for Best Playwright, and recently was presented at the 2013 Minnesota Fringe Festival to strong critical acclaim from audiences and critics alike.

“One of the best shows I have seen… Heartwarming … You see a very personal side of the actor that makes you honored to see his show and hear his story. You definitely have to see this show.”
– Twin Cities Daily Planet

‘Cocaine and Ethel Merman: The New Homo Guide’ opens on April 2 in Milwaukee, 730PM at the Boulevard Ensemble Studio Theatre, 2252 Kinnickinnic, and then moves to Madison on April 3, 730PM at Edgewood College, 1000 Edgewood College Drive, in the Black Box Theatre, and then wraps up in Wausau with two shows on April 4 & 5, 730PM on the University of Wisconsin Marathon County, 518 S. 7th Ave in the Auditorium (Room 133).

Tickets can be purchased at the door, reserved via email at [email protected], or by calling the Proud Theater information line at 608-222-9086. Tickets must be picked up no later than 15 minutes before curtain, or they will be made available for sale. The box office opens ½ hour before show time.

Proud Theater is a program of Art and Soul Innovations (artandsoulinnovations.org), and enjoys generous financial support from the Mukti Fund (muktifund.com) as well as from the PFund Foundation (pfundonline.org) and The New Harvest Foundation (newharvestfoundation.org).

For more info on Proud Theater, contact Executive Director Brian Wild at [email protected], or call Proud Theater at 608-222-9086. Tax-deductible donations to the organization can be sent to: Proud Theater, PO Box 6306, Monona WI, 53716, or via PayPal at www.proudtheater.org.

Proud Theater: Changing the world through the power of theater and the theater arts, and making a positive difference in the lives of LGBTQI and allied youth through the tenets of art, heart, and activism!