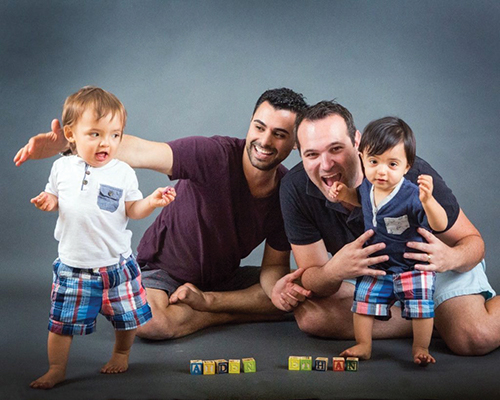 Did you ever imagine that a child can be a U.S. citizen at birth, but his twin brother cannot? That’s what the U.S. Department of State told Andrew Mason Dvash-Banks and his husband, Elad Dvash-Banks when they tried to register their twin sons’ U.S. citizenship at the U.S. Consulate in Toronto, Canada.

Andrew is an American citizen, born and raised in the U.S., and Elad is Israeli. The couple moved to Canada where they could legally marry. By the time of their marriage in 2010, the U.S. Supreme Court had not yet declared the Defense of Marriage Act (DOMA) unconstitutional.

In 2015, Andrew and Elad used their own sperm and eggs from one anonymous donor. The pregnancy was carried to term by a surrogate and the twins, Ethan and Aiden, were born minutes apart in 2016, in Canada. Andrew and Elad are the only parents listed on the children’s birth certificates. They are the children’s legal parents for all legal reasons…except one.

When it came to citizenship laws, they hit a roadblock. Andrew and Elad applied for a Consular Report of Birth Abroad for both children, a document that confirms children born abroad acquired U.S. citizenship through one of the parents. Before making its decision, the consular officer subjected Andrew and Elad to countless questions about their private life, how the children were conceived, which spouse provided the sperm for which child, etc. The officer then required DNA testing.

Upon confirming Aiden to be Andrew’s biological son, the U.S. Consulate granted U.S. citizenship to him, but denied it to Ethan, who is Elad’s biological son. The Consulate stated its decision was based on the Immigration and Nationality Act which, the Consulate claimed, requires a blood relationship between the child and the U.S. parent in order for the child to acquire citizenship at birth. This decision literally made one of the infant twins—Ethan—as the only member of the family not eligible to permanently reside in the United States.

Another couple, Alisson Blixt, a U.S. citizen, and her wife, Stefania Zaccari, an Italian citizen, had the same problem for their two sons. Alison gave birth to Massi and Stefania gave birth to Lucas. The couple was married at the time the boys were born, and they are the only parents listed on the birth certificates. Massi was granted citizenship at birth, but Lucas was not. Just like the Dvash-Banks family, Lucas is literally the only family member who may not permanently reside in the United States.

Both couples have brought lawsuits against the federal government seeking to obtain automatic citizenship for Ethan and Lucas, respectively.

The Immigration and Nationality Act (INA) is the core immigration law in the U.S. It was enacted in 1952 and it has seen various amendments throughout the years. Unfortunately, most amendments have failed to keep up with the advancement in technology. Therefore, the current version of the INA has many grey areas because it is currently applied to fact patterns that were not possible more than 60 years ago. However, Andrew and Elad, as well as Alisson and Stefania, argue that their cases are not grey areas at all.

Immigration law is implemented by different federal agencies through various instruments. In the end, each instrument must stay true to the original law. In the cases of Ethan and Lucas, respectively, their parents argue that the instruments used to implement the law deviated from what the law had intended.

Section 301(g) of the INA states that a person born outside of the U.S. of a parent who is a U.S. citizen and one who is not, automatically derives citizenship at birth if the U.S. citizen parent was physically present in the U.S. for at least five years prior to the child’s birth, at least two of which being after the parent’s fourteenth birthday. It defines the term “parent” as a relationship that exists when a child is born in wedlock, among other situations.

Both families seemed to fit the bill. In each case, one of the parents is a U.S. citizen who had lived in the U.S. most of their life. After the U.S. Supreme Court declared DOMA unconstitutional in 2013, the U.S. federal government began recognizing same-sex marriage for immigration purposes if the marriage was legal at the time and place where it occurred. By the time Ethan and Lucas were born, their respective parents’ marriages were recognized by the federal government. Therefore, they were born in wedlock.

However, the U.S. Consulate treated Ethan and Lucas as born out of wedlock and applied a different section of the INA that does require establishing a biological relationship with the child. Section 301 does not require the same for children born in wedlock.

The consular official informed the Dvash-Banks’ family that she had the discretion to order DNA testing, and she chose to apply it in their case. Notably, when heterosexual couples provide marriage and birth certificates for purposes of establishing citizenship, they are not routinely grilled about their private lives nor are they routinely subjected to DNA testing to establish a biological connection.

The FAM is not subject to usual enacting procedures such as Congressional debate, Senate, or House of Representatives votes, or even public comment. It is not a law. It is merely a “user manual” designed by the U.S. Department of State. Yet it rules the U.S. Consulates’ policy regarding surrogacy abroad. Now it is up to the Courts to determine whether U.S. Immigration policy is going to catch up to technology and provide equal rights for all children born to same-sex couples with international roots. In the meantime, Ethan was allowed into the United States with his family, but only under a temporary tourist status, which has since expired.