Gay and Lesbian by Official Order 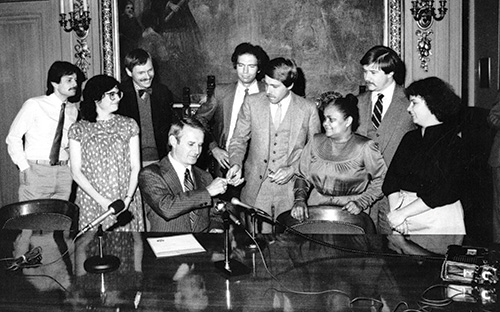 In 1982, Wisconsin made national news by being the first state to enact a nondiscrimination law on the basis of sexual orientation. Republican Governor Lee Sherman Dreyfus signed the bill authored by Democratic State Representative David Clarenbach, and it passed with bipartisan votes into law in the spring of that year. Dreyfus then upset the political applecart by announcing he would not run for reelection.

The winner of the fall 1982 general election was Democrat Anthony Earl, who had openly campaigned in favor of gay rights. This raised hopes that he might appoint a special liaison to the lesbian and gay community. Liberal mayors around the country had appointed a few such positions, and this appeared an opportune time to push for such a position in Wisconsin.

As he began to appoint key aides, Governor-Elect Earl named as his press secretary Ron McCrea, who he knew from the Madison press corps, though McCrea was now working for a California paper. Ron had also been a gay activist, having been involved with the state’s first gay organization, the Madison Alliance for Homosexual Equality (MAHE). The Milwaukee Sentinel headlined its story, “Avowed Homosexual Named Press Chief.” McCrea offered to decline over the controversy, but Earl would have none of it.

Beyond the McCrea appointment, there was still grassroots interest in a position that would specifically be appointed to work with the gay and lesbian community. Several well-known activists from each of the Madison and Milwaukee lesbian and gay communities were recommended during the transition period prior to the swearing in of the new governor.

The decision was made, however, that the Executive Office’s budget could not afford a liaison position. Despite this, Governor Earl still wanted to work with Wisconsin’s lesbian and gay communities. In 1982, when I had already served one term on the Dane County Board as a gay man, Kathleen Nichols, a lesbian activist, joined me. We wrote a joint letter to Gov. Earl congratulating him for his forthright support on gay issues. This led to a request by the Governor for a meeting.

Earl knew the lack of an appointment of a liaison had been a disappointment, and he wanted to gather information on what things he might instead do. Earl asked Kathleen and me to go visit with lesbian and gay communities around the state.  It was sort of like Charlemagne sending out a pair of officials, or missi dominici, to inform him. We took to the road and visited Racine, Milwaukee, Stevens Point, Green Bay, La Crosse, and Appleton.

Meanwhile there were discussions around another Wisconsin model of a Governor’s Commission. One of the most famous had been the Governor’s Commission on the Status of Women, appointed by Governor Lucey in the early seventies and chaired by Katherine Clarenbach, a nationally known feminist. This body had highlighted and advanced women’s issues.

After traveling the state, Kathleen and I reported to the Governor and recommended he appoint, by Executive Order, a Council on Lesbian and Gay Issues. The Governor accepted the recommendation and in turn asked us both to serve as co-chairs of such a body. When the appointments were later announced the Milwaukee Journal wrote, “It is significant, we think, that both Nichols and Wagner…serve in elective public office” and “indicates a welcome degree of public enlightenment about homosexuals, at least in their community.” Next we worked with the Executive Office staff to draft the Executive Order and with the appointments secretary on who would be on the Council.

The Executive Order stated the body “would be of assistance in advising the Governor and executive branch agencies on measures to eliminate discrimination against and victimization of lesbians and gays in Wisconsin.” The order established there would be gender parity and minority representation. It instructed the “Council to advocate for lesbian and gay interests in general areas of concern throughout the state.”

The first appointments ranged from Mark Behar, a physician’s assistant with the Brady East STD Clinic, to Cheryle Williams, a graphic artist with the Wisconsin Women’s Building Project; from Louie Crew, an English professor at Stevens Point who founded the gay Episcopal group Integrity, to Cynthia Lampman, a Racine activist who edited a national gay newsletter for the Unitarian Universalists; from Lawrence Roeming, a deputy sheriff in Racine County, to Charlene McLauchlan, a technical writer who also had a 17 acre goat farm in LaValle and lawyer Shelly Gaylord who would go on to be a Dane County Circuit judge.

Governor Earl spoke to the first meeting on April 23, 1983. He praised the members: “By stepping forward to become a part of this council, you have already shown the kind of courage and determination necessary to overcome frustration and achieve goals.” Earl said of Wisconsin, “Many here are unaware of the size, richness, and sophistication of the lesbian and gay community. They are unaware in part because long habits of dislike, disapproval, and discrimination—largely the result of ignorance—have made it necessary for gays and lesbians to conceal a part of themselves and lead double lives.”

Showing the ongoing struggle, that same month the Shawano County Board unanimously adopted a resolution urging a repeal of the state gay rights law. That debate had offered the assertion that “Wisconsin has attracted more homosexuals since they were granted equal rights.”

Also speaking to the group’s first meeting were Rep. Clarenbach and Fran Tryon, Administrator of the Equal Rights Division, charged with enforcing Wisconsin’s new nondiscrimination statute. She reported working with the Wisconsin Lesbian/Gay Network on outreach efforts about the relatively new law. She observed there was a tendency to settle complaints based on sexual orientation rather than going through the formal hearing mechanism.

At the first meeting, because of the increasing national AIDS crisis, the Council’s whereas clause noted one thousand cases had been reported nationally, and so it adopted a resolution I had prepared that requested significant new funds for research into the transmission and cure of AIDS. Copies were sent to President Ronald Reagan and the Wisconsin congressional delegation.

While the 1982 law was groundbreaking in providing state power to prevent and remedy discrimination based on any sexual orientation, this 1983 effort was another step altogether, an actual positive recognition of the lesbian and gay communities in the state. The listing of the Governor’s Council on Lesbian and Gay Issues in the 1983–84 Blue Book would be the first appearance of lesbians and gays in the official record of the state other than the earlier criminal laws.

Unfortunately Gov. Earl was not re-elected in 1986. One of the attacks had been to characterize his gay-friendly efforts as part of his “Granola” administration—that is, made up of fruits, nuts, and a few flakes. Tommy Thompson was elected and abolished the Council.