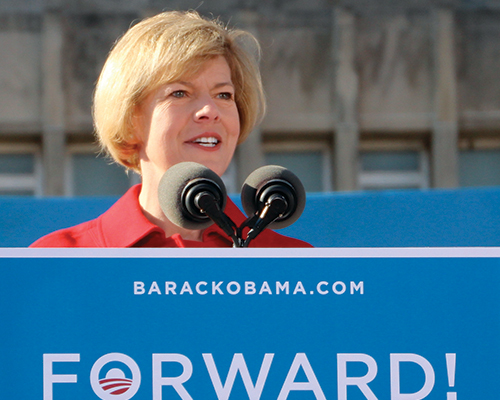 The arc of history is short. Or so it would seem in Wisconsin as openly lesbian Senator Tammy Baldwin (D-WI) assumes the seat formerly held by the witch-hunting Senator Joe McCarthy. The irony is that modern scholars like David K. Johnson in The Lavender Scare: The Cold War Persecution of Gays and Lesbians in the Federal Government have shown that more gays than communists were fired as result of the rabid witch hunts of McCarthyism that the senator launched.

How does a state go from sending a witch hunter, even one with a closeted homosexual aide like Roy Cohn, to electing the first out lesbian senator? For more on Roy Cohn, see the devastating portrayal by Tony Kushner in Angels in America. Indeed, with the election of Democratic Representative Mark Pocan and remembering Republican Congressman Steve Gunderson, who won re-election as a gay man, Wisconsin is the first state in the nation to elect three out members of Congress. Is it something in the water, in the beer, in the cheesehead hats, or what?

To answer the question, it helps to know a little of the gay history of Wisconsin. In the 1920s, gay folks in Wisconsin would seem to have had few choices. Glenway Wescott, writer from Horicon, went to Paris in the post-World War I wave of American expatriates, where he hung around with the likes of Gertrude Stein and Andre Gide. Returning to America, Wescott published a book of short stories entitled Goodbye Wisconsin. Then he settled in New York with his partner Monroe Wheeler, who worked for the Museum of Modern Art. They befriended famous gay photographer George Platt Lynes. While Wescott had a distinguished career, he was far from the stories in The Grandmothers, his early book depicting life on Wisconsin farms.

But one did not actually have to flee Wisconsin; another choice was available. Robert Neal from Wisconsin spent some time in Sryie Maugham’s Chicago design store and then went to London to continue his work for her. But unlike Wescott, he decided to return to Wisconsin. Neal and his partner Edgar Hellum bought a very run-down Cornish stone cottage in the small town of Mineral Point. There they became a leading force in historic preservation and in the revival of the Cornish culture from the early mining history of the state. They created their own safe, if quiet, space for their talents and gay identity.

Neal and Hellum were not alone. They were joined into what I term a “Fairy Network” across Southern Wisconsin in the 1930s. The network included what might have been called “artistic” types, such as Keith McCutcheon, the Shakespeare of the Sandbars, a poet from the river town of Arena who published small poetry books for twilight lovers. Other gay preservationists were busy in the unincorporated village of Cooksville. Ted Pierce, an African American ballet fan in Madison, provided links to gay folks in New Glarus. Milt Sherman, a student writer at The Daily Cardinal on the UW campus, reviewed an early book on “homosexualism.” And the campus paper published the literary works of McCutcheon.

At the end of World War II, University of Wisconsin professors were studying small groups of soldiers who had been identified as homosexuals at Madison’s Truax Field. Research indicated none of them wanted to be changed and that they had their own club or support network. A Milwaukee Crime Prevention Commission also studied hundreds of “perverts,” or homosexuals, in the mid-1940s. In 1945, the Commission persuaded Milwaukee legislators to sponsor a sexual psychopath law to lock up homosexuals before they could commit crimes. While they successfully passed the constitutionally dubious law in 1947, no one was imprisoned under it.

Then in 1966, several years before Stonewall, the Young Democrats of Wisconsin in their convention at Manitowoc adopted a sex plank that asked for the repeal of laws criminalizing homosexuality. The story got picked up by The New York Times for its first-in-the-nation action by a political group. Conservative Democrats attacked the youngsters. Republican Governor Warren Knowles noted that the split into “homocrats and Democrats” was remarkable. Ody Fish, the state Republican Chairman, thought sex not a fit topic for the state’s politics. Within the decade, the adult Wisconsin Democratic Party had adopted a similar stance to the pioneering Young Dems.

Once Stonewall occurred in New York, the response in Wisconsin was immediate. By the fall of 1969, Madison had its first gay-rights organization, and Milwaukee followed in the spring of 1970. Wisconsin became part of the “third coast” for gay rights, an alternative-coast imagery pioneered in the anti-war movement. Early famous gay speakers crisscrossing the nation were often in Wisconsin. The Gay People’s Union News out of Milwaukee became one of a series of national publications.

Before Harvey Milk was elected in San Francisco in the fall of 1977, openly gay James Yeadon was seated on the Madison City Council in 1976 and won re-election in the spring of 1977. He had championed Madison’s adoption in 1975 of a nondiscrimination ordinance on the basis of sexual orientation, again well before San Francisco or New York would adopt theirs. The Madison example was followed by the City of Milwaukee in 1979 and Dane County in 1980. Since then, more than two dozen gay and lesbian officials have been elected in the Madison area alone. Today, out officials come from Milwaukee, Appleton, and Waukesha as well.

In 1982, Wisconsin, under the leadership of State Representative David Clarenbach, became the first state in the nation to pass a nondiscrimination law based on sexual orientation. The work had been pioneered a decade before by African American legislator Lloyd Barbee from Milwaukee. Recently, at the 30th-anniversary celebrations for the law, for which I, too, had fought at the time, that passage seemed so far in the past. Yet, the fight seems forever fresh today.

These successes depended, to borrow a phrase from Tennessee Williams, “on the kindness of strangers.” While the state has had an early, and—since Stonewall—an active LGBTQ community, its numbers are not large. As far as research can tell, there were no gay folks in Manitowoc to spur the Young Dems. When the Madison Equal Opportunities Commission took up the cause of nondiscrimination, it was the chairperson who had invited gay advocates to the meeting. When the 1982 state legislature passed the gay-rights bill, it was overwhelmingly straight votes of both Democrats and some Republicans—and, yes, a few closeted ones, too—who voted for it. Senator Baldwin’s opponent was among the legislative Republican “no” votes, but Republican Governor Lee Sherman Dreyfus signed the bill into law.

The pattern of victory in Wisconsin has been that of a gay community that builds itself and its institutions, from gay softball to gay foundations. With the confidence and skills of internal successes, it then presents itself to the larger community, who begin as strangers but come to know the lives and needs of LGBTQ folks. Appealing to a sense of fairness, the gay community asks for understanding and then to share in the rights of fellow citizens. By not being strangers, we request kindness. It says a lot about Wisconsin that most often that response has been positive.

As a swing state with independent voters, Wisconsin elections are often close and unpredictable. But the actions and successes of past half-century made Wisconsinites open to electing an out person in 2012. Tammy Baldwin brought her own formidable skills as a legislator, policymaker, and campaigner to the past election. She appealed to voters on the basis of a willingness to be honest with them about who she is and for what she stands. In the best of the state’s progressive traditions, congratulations to our new Senator Tammy Baldwin. On, Wisconsin!