Our History, On Tape

David Runyon was an iconic force whose presence in Madison touched many lives, from 1965 until his death in January 2001. Through his advocacy and activism, along with a long-running community television program highlighting LGBTQ people in the area, his work impacted people from all walks of life.

A New Jersey native, Runyon had a background that included military service, studying under community organizer Saul Alinsky at a Presbyterian theological seminary, and service as a minister and educator.

He and his wife moved to Madison in 1965 to attend the University of Wisconsin to study in the Department of Landscape Architecture and Art History. As an Assistant Professor of Art, he taught art history and architecture at the U.W.-Whitewater beginning in 1968 and until he retired in 1995.

Meanwhile, David participated in establishing and enriching several Madison LGBTQ organizations. He came out in 1978, a year following his amicable divorce, and immersed himself in discussion groups at the Gay Center at the University United Methodist Church at Charter. He loved to sing, so became a founding member of the Madison Gay Men’s Chorale in 1980. Years later he and others from the Gay Center and The United worked with District Attorney Hal Harlow to create a legal defense strategy to develop a group for gay teens (which would become Madison’s PFLAG chapter), which was established by Jane LaFlash.

He immersed himself in videography via a weekly show on WYOU Community Cable Access and produced well over 800 shows in over 20 years.

Referring to himself as the “crusty curmudgeon,” he hosted intersectional groups of his life—his gay friends, colleagues, and students alike—at scores of discussions, gatherings, and potlucks at his home on the north side and in excursions for camping, cycling, theater, sailing, and touring. He founded the group “Shake It Up” to formalize the frequent offering of events and published a monthly newsletter that included activities of many LGBTQ groups up to the time of his death.

In the 1990s, he was generous and gave a new satellite dish to WYOU Community Television, a meeting room to OutReach, Inc., was the first donor for the Social Justice Center, and underwrote plays for Broom Street Theatre. Joel Gersmann, Broom Street’s founder and director said, “He was almost a second mentor for me. He was the most unusual and awesome person I have ever met in the city of Madison. There will not be anybody else like him.”

On a sunny Friday morning, January 5, 2001, David Runyon died of a heart attack in the arms of a dear friend, Greg Converse, after shoveling heavy snow. A week later, a Celebration of Life to share stories among his friends filled the Unitarian Meeting House sanctuary. Tales of Runyon’s work, his humor, his antics, and the inspiration he gave to others brought tears and joyous laughter to the capacity crowd.

In the following days, several people met at Lazy Jane’s to plan an effort to see that Runyon’s work, in his vast collection of videotapes, wasn’t thrown out. The outcome of his estate was unpredictable since he didn’t have a will or close blood family.

In 1979, Runyon, then 48, began his work in community access television as a volunteer with Michael Henry for a newly created, weekly, gay-oriented cable television show on WYOU in Madison, called “Glad To Be Gay.” Produced by The United, Madison’s lesbian and gay political advocacy group, it was one of the few gay-themed TV shows airing in the nation at the time.

Runyon, had just come out a year earlier and participated in creating the show, taping coverage of the second gay pride parade in Madison in 1979, and recording interviews with Police Chief David Couper, District Attorney James Doyle, U.W.-Madison professor of history Harvey Goldberg, and he recorded musicians Holly Near, Cris Williamson, and Meg Christian.

Interested in having more control over content of the shows, Runyon left “Glad To Be Gay” in 1981 and created his own program, “Nothing To Hide,” a weekly hour-long show. It began as a “studio” show, featuring a magazine format of news and panel discussions. By early 1983, he took to filming on the road, capturing local events in the LGBTQ community and talks by visiting celebrities on LGBTQ and other issues.

Runyon was an ever-present fixture, recording events, programs and talks in the Madison community and elsewhere, compiling a remarkable visual record of a changing LGBTQ community locally and nationally, and an extraordinary archive of political thought. At the time of his death, “Nothing To Hide” was the longest-running LGBT television program anywhere.

Spanning 20 years and over 800 tapes, the “Nothing to Hide” Collection is one of the most important LGBTQ video archives of its kind in the country. The collection is noteworthy for its range of topics and being a rare video document of a small Midwestern city gay liberation movement. Although many speakers were considered historically important when Runyon filmed them, their activities were not documented by the mainstream media. Full-length speeches by many of the LGBTQ political luminaries represented in the “Nothing to Hide” Collection are not available in any other public repository in the nation.

Speeches by LGBTQ history-makers in the collection include Harry Hay, founder of the modern gay movement in 1950; Del Martin and Phyllis Lyon, founders of the first social and political organization for lesbians in the United States in 1955; Ann Bannon, lesbian pulp-fiction author of the 1950s and ‘60s; Charlotte Bunch, pioneering strategist and organizer of women’s issues in the 1960s and ‘70s; Virginia Appuzzo, 1970s leader of the first national gay and lesbian lobby organization; Judy Grahn, internationally known poet, and woman-centered cultural theorist; Minnesota State Representative Karen Clark, openly gay state senate candidate in 1980; Carmen Vasquez, coordinator of Lesbian and Gay Health Services for the City of San Francisco from 1988 through 1994; Urvashi Vaid, National Gay and Lesbian Task Force staffer from 1986 to 2001; Mel White, former ghostwriter for the religious right who became a gay-affirming pastor; and Larry Kramer, Author, Playwright, Founder of Gay Men’s Health Crisis, and Founder of ACT-UP.

The collection includes documentary footage covering two milestone dates in Wisconsin LGBTQ history. One program was filmed at the Capitol on February 25, 1982, and shows Governor Lee Sherman Dreyfus’ statement at the signing of AB70, the “Gay Rights Bill” that made Wisconsin the first state in the nation to ban discrimination based on sexual orientation in employment, housing, and public accommodations.

Following it is the Governor’s press conference and interviews with those who worked toward its passage: Leon Rouse, Barbara Lightner, Terry Gillis, and the chief proponent and organizer behind the bill, Assembly Representative David Clarenbach. Another program covers the signing of the Consenting Adults Bill on May 5, 1983 that repealed the “sexual perversion” law that Clarenbach also shepherded through the Legislature.

Coverage of the AIDS epidemic began in 1983 with a two-hour interview with an AIDS patient in his Minneapolis hospital room; a 1985 training video for Hospice volunteers; a 1986 “AIDS Survival Kit” video produced by University Health Services with Blue Bus Director, Tim Tillotson, discussing changing approaches to HIV prevention; and the AIDS Quilt visit to Madison in 1989; among others.

The ban on gays in the military is represented with episodes featuring Leonard Matlovich and Wisconsin residents Miriam Ben Shalom and Jay Hatheway, the three main litigants in the 1970s and ‘80s lawsuits against the government ban. Interviews with later challengers to the policy include Joseph Steffan and Col. Margarethe Cammermeyer.

The collection includes the proceedings of the 5th, 7th, and 9th Annual International Gathering of Lesbian and Gay Elected and Appointed Officials in 1989, 1991, and 1993. The only gathering of its kind, the conference was the largest gathering of LGBTQ leaders from across the country and abroad discussing political concerns and strategies of the day.

Black and White Men Together National Conference proceedings from 1987 to 1990 include discussions on Interracial Gay Dating, issues of Latino, Asian, and First American Gay Men, Gay Men of Color & AIDS. 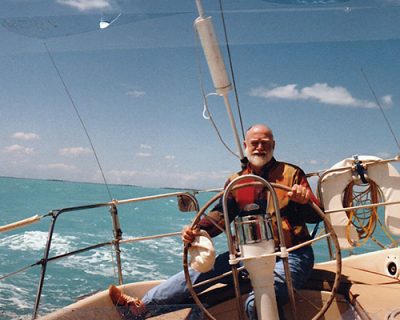 David Runyon wanted public access to the “Nothing To Hide” collection, so he left much of it with WYOU Community Television prior to his untimely death in 2001. The balance he had placed with other entities related to their relative subjects.

There were many missing tapes. Runyon stated in an interview in 1996 that videos from his earliest years were given to the Sociology Library as a repository, though when funding was cut they were deaccessioned.

Runyon gave his monthly women’s program videos to the Women’s Studies Department, of which only 16 tapes of nationally famous lesbians speaking in Madison remain—the programs about local women were discarded. Twenty-four tapes covering AIDS-related topics were in the possession of Madison AIDS Network, presently the AIDS Resource Center of Wisconsin, located in Milwaukee. Their location is unknown.

Other tapes that were lent have since been retrieved, including 50 tapes at OutReach, Inc., the local LGBTQ advocacy center.

Scott Seyforth, an administrator at the University Housing Department and a graduate student in Education, while preparing to teach a gay movement course in 2007, discovered the cache of tapes at WYOU. He realized they were a great historical resource but access to them was stultifying. He spent “a month of Tuesdays” going through a wall of boxes, just listing the titles of the video programs from their labels.

To preserve the collection for future scholarly use and honor David Runyon’s wishes for public access to the collection, Seyforth and WYOU developed a proposal in late 2008 requesting that the University of Wisconsin Madison Library System preserve the “Nothing To Hide” collection by making digitized copies available for viewing through video-streaming. The proposal was sponsored by Joseph W. Elder, Professor of Sociology and Languages and Cultures of Asia; Mary Louise Roberts, Professor of History; James Steakley, Professor of German; John Tortorice, Director of the George L. Mosse Program in History; Mariamne H. Whatley, Professor of Education; and Susan Zaeske, Professor of Communication Arts.

Nine months later, their proposal was accepted. On Friday, November 13, 2009, in a ceremony at which then-Congresswoman Tammy Baldwin and State Representative Spencer Black spoke, the 40 boxes of 800 two-hour videotapes were presented. They had been walked from the studio—then on East Washington—to the Library by station volunteers and friends (including Our Lives Publisher, Patrick Farabaugh) on foot. Currently, the collection is still, though temporarily, located at the U.W. Memorial Library.

In 2017, David Pavelich, Director of Special Collections & Archives, applied to the Evjue Foundation to underwrite the high-resolution digital scans, archiving and making them available on the web. The request was funded in May 2018.

According to Katie Nash, archivist of the University of Wisconsin Archives, the tapes are queued for digitizing and archiving during the coming year. The videos will be digitally mastered in real time, searchable tags identified, and made available online.

The result will be the largest collection of LGBTQ videos of a crucial era with unique and rare footage not found in other libraries or archives, and will provide material to support emerging LGBTQ Studies programs at home and afar. This archival project is as essential as the ongoing work, today. It is an important part of our legacy—and of the legacy of David Runyon.

How you can help

David Runyon made many copies and gave them away, covering the programs he recorded and aired on “Glad To Be Gay” and “Nothing To Hide.” People also made copies at home. The Madison LGBTQ Archives Committee is seeking these copies to digitize and archive.