Prism Dance Club reckons with the shadow of Plan B 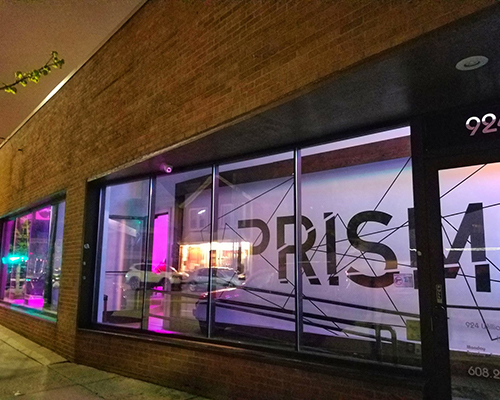 Walking into the new Willy Street club Prism during its opening celebration on March 1, one could’ve been forgiven for having deja vu.

That first night, the new management of Rico Sabatini, Lili Luxe, and Apollo Marquez, introduced some changes that made it clear they wanted to leave behind the club’s previous incarnation as Plan B. The drinks were cheaper, the paint was fresh, and anything with “Plan B” on it was gone.

But in other ways, it still felt like the old Plan B. The familiar Top 40 remixes spun by DJ Nick Nice radiated across the dance floor and throughout the club. Endlessly entertaining drag queens and burlesque dancers performed their equally hilarious and sexy numbers. The euphoric laughs and dancing from patrons echoed through the night.

At the very least, the scene evoked what Plan B was like on a good night, when the club’s deep-seated problems weren’t readily apparent. Those problems, as Our Lives’ Emily Mills reported in December 2018, included allegations of harassment, staff barring drag performers from a dressing room, and a growing sense that Plan B wasn’t a safe space for the queer community. Mills, who is also a Tone Madison contributor, said she had been preparing that story for a year before the dressing-room issue had even happened.

In January, Sabatini, who co-founded Plan B but sold his stake in 2014, announced that he would buy it back, and formed a partnership with Marquez, best known as owner of the now-closed north-side club Inferno. They renamed the club Prism, promised a fresh start, and brought on Luxe as events coordinator. Luxe has a long track record of booking music, burlesque, and fetish events at venues including including the Inferno, Tavernakaya, North Street Cabaret, and Nomad World Pub, and is an outspoken advocate for inclusivity, accountability, and consent in the arts community. The team at Prism has promised and implemented sweeping changes, ranging from the club’s added emphasis on dancing to a staff-wide training in June with the Rape Crisis Center on consent and club culture.

“I know what the steps are, at least in my mind, as a queer woman, of what I would like to see the space do to be better,” Luxe says. “[It needs] having the support of actually active management with Rico and Apollo, working with the staff and honestly supporting them through talking about safe spaces, harassment, and how we deal with things when an issue arises—how we have standards and want you to do XYZ when this happens.

“There’s always going to be that risk when you open the door,” Luxe adds, “but it’s about how you deal with the situations when they arise and how you’re proactive versus just being reactive.”

When Sabatini bought out Plan B’s owners—one of whom, Albert Borokhim, had been accused of sexual misconduct—many patrons were enthused at the potential of a return to the club’s better days.

Others, like Jake Posateri, who performs under the drag name Baby Bear, remained skeptical. In a January Facebook post, he expressed concern that though Sabatini had addressed issues like access to dressing rooms and adequate payment for performers, larger issues could still loom over the club and prevent the space from being safe—especially if staff mishandled problems with sexual misconduct, or if security officers engaged in racist behavior. (One Plan B patron told Our Lives that security guards punched him, arbitrarily threw him out of the club, and used a racial slur.)

But on Saturday, March 30, Posateri performed at Prism. He attributes his change of heart to Sabatini’s decision to bring Marquez and Luxe aboard.

“That is really what gave me faith,” Posateri says. “Right now the model is you have [Sabatini], who was an owner of Plan B when it first opened, and was an owner when it was the heyday of Plan B. You have [Marquez] who I’ve known since 2012. I used to perform at the Inferno regularly. They curated this wonderful environment for a very diverse crowd. And there’s [Luxe], who is this powerhouse businessperson that is an advocate for consent, for diversity, for equality.”

Luxe, who now helms Prism’s programming, has changed things on many levels. The performances are now more interspersed throughout the evening and dancing is the priority. Luxe has also sought to diversify the programming, in terms of both the types of art represented and the people who are performing.

Mills added that this kind of representation, in addition to staff and security, can help people whose identities are being reflected feel more welcome in any given space.

One recent residency addition to Prism is Tempestt Ballenger, who spins under the name DJ Femme Noir every Thursday for the club’s 18+ nights.

“I think representation is important. It’s one thing to be willing to say, ‘Oh yeah we’re here for everybody’ or, ‘Oh, we represent everyone,’ but it’s another to actually be it,” Ballenger says. “There are different performers of all genders, sexual orientations, and races.”

Many of the performers who spoke with Tone Madison for this piece say the club’s atmosphere has changed for the better, and had no qualms about the progress made by Prism’s new management team. One had an experience that indicates Prism still has work to do.

When Micah Dombroe (stage name DJ Kalycho) DJed at Prism on March 22, they experienced harassment that would’ve seemed right at home at Plan B. During their set, a presumably cisgender male began to repeatedly harass Dombroe to play music they didn’t have, and used targeted slurs.

Later, while packing up, Dombroe was stared down by the harasser and then asked a security officer to accompany them to their car. Dombroe also noted that all of what happened that night was completely unexpected, due to the promises they felt had been made about how different Prism was supposed to be.

A week later, Dombroe reported the incident to Prism through the club’s Facebook page. Luxe responded with concern and implemented changes to the club’s DJ booth, adding a door, a flashlight and a radio, and updated security policies so that staff checks in with artists more frequently.

“I think all of those are great ideas for protecting performers, but it’s one thing to protect your performers when on any given night your performers are a few individuals in what could be a room of hundreds,” Dombroe says. “My concern is not just for performers, not just for myself, not just for whoever is on stage or who is in the DJ booth. Certainly, those people deserve to be protected or treated well just like anybody else, but if you’re not fundamentally changing the culture that allows harassment to occur to anyone—performer or patron—then you’re not actually improving the venue itself.”

Luxe says this is the first and only such incident she’s heard of since Prism opened, and shared with Tone Madison the same list of measures about the DJ booth that she shared with Dombroe. Luxe also says that she took the initiative to contact 30 other queer, femme, and trans customers and, aside from a few issues with people having their pictures taken without consent, received glowing reviews. If incidents do happen again, she hopes that people will give feedback so that she, Sabatini, and Marquez can continue to make changes.

Luxe also said that the staff had an all-staff training recently where she led a lengthy discussion on harassment policies, understanding privilege and microaggressions, and she went through some role-play scenarios of how to recognize and deal with situations. She is still planning a training session with the Rape Crisis Center in Madison for all staff and anyone else who is interested.

The root of the issue

Mills says that to create a safer space, Prism needs to not just get rid of the problem patrons from the Plan B days, but also empower patrons to look after each other and hold others accountable. She says Marquez succeeded in doing that during the Inferno years.

Sabatini also says he doesn’t want to discount Dombroe’s experience, but insists that it was just one incident in what he sees as an otherwise successful turnaround. He argues that people who were previously turned off by their experiences at Plan B have started coming back in the Prism era. He adds that Prism has taken steps to improve security and educate staff, and to have owners be an active presence in the club’s day-to-day operations. But he acknowledges that there’s still work to be done.