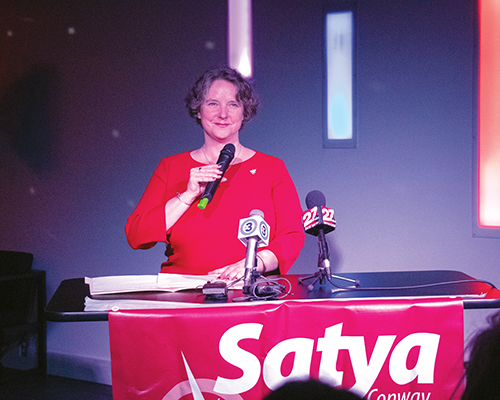 Rhodes-Conway made history as the city’s first lesbian, and just the second woman, to hold the office. Her campaign focused on pushing for greater equity in housing and transit, racial justice work, and a focus on better preparing Madison to deal with climate change.

Prism Dance Club (formerly Plan B) was filled with cheerful supporters, including a large contingent of Madison’s LGBTQ+ community, for Rhodes-Conway’s victory party Tuesday night. “Girl On Fire” by Alicia Keys played, per the mayor-elect’s request, as she entered the building to rousing applause shortly after local news outlets called the race in her favor.

“Tonight, I am full of hope,” Rhodes-Conway said during a short and heartfelt victory speech. “I have hope for young people everywhere but especially here in Madison that have felt left out or talked down to or bullied because of who they are. I have felt that way once upon a time, and look where I am now.”

She also thanked Soglin for his long work on behalf of the city, and urged the community to stay active and involved with civic life. “I am full of hope for our city,” she said. “Hope that we can be the equitable and sustainable city that we want to be, that we can be, but I know that I will need your help to make that come true. Please stay engaged with city government. We will need you to hold us accountable to those goals. We will need you to help make Madison a city where everyone has the opportunity to thrive.”

Rhodes-Conway was officially sworn in on April 16.

Thank you, Madison! In the words of the great Harvey Milk, “It’s not my victory. It’s yours and yours and it’s yours.”

I have to thank the intrepid canvassers who fanned out across the city in the ice and snow and rain, and the hundreds of others who contributed time, talent, and treasure. Each and every one of you helped make this possible. Thank you.

And I also want to thank Paul Soglin. I just got off the phone with him. I congratulated him and I thanked him on behalf of all of us for his steadfast work on behalf of this city. I’m really glad that this campaign stayed focus on the issues that are important to Madison.

To quote Harvey again, that’s what it’s all about. Harvey said, and he’s right, “It’s not about personal gain. It’s not about ego, it’s not about power. It’s about giving young people out there hope. You gotta give them hope.” Tonight, I am full of hope. I have hope for young people everywhere but especially here in Madison that have felt left out or talked down to or bullied because of who they are. I have felt that way once upon a time, and look where I am now.

I am so looking forward to working with all of you as your next mayor.

GSAFE Co-Executive Director Ali Muldrow and Department of Public Instruction equity consultant Ananda Mirilli both won their races for Madison School Board in April. Their victories, along with Christiana Carusi in seat three, helped flip the board to entirely women members, and added representation by at least two queer people of color.

Muldrow and Mirilli ran a somewhat unique, collaborative campaign, appearing together at events and providing support to each other’s work while boosting media coverage for both.

In the contest for seat four, Muldrow handily beat longtime conservative gadfly Dave Blaska with 70% of the vote. She focused her campaign on creating a more inclusive environment for LGBTQ+ students, students of color, and students with disabilities. Muldrow will also push for better funding and integration of arts education.

For seat five, Mirilli bested incumbent TJ Mertz with 58% of the vote and a campaign based on addressing school safety issues and racial disparities. The former director for the restorative justice program at the YWCA, Mirilli cites her work to expand that program throughout Dane County as experience she’ll bring to her work with Madison’s public schools.

In one of the larger turnovers in recent memory, the Madison Common Council saw nine new members elected the body in the April election. The results also delivered a big win for the grassroots, liberal political party Progressive Dane, with its endorsed candidates capturing the mayor’s office and nine of 12 council seats in which it made an endorsement.

At least one of those newly elected, Patrick Heck, identifies as gay. Heck will represent District 2 and is a 15-year resident of the Tenney-Lapham Neighborhood, where he’s been active on the TLNA in various capacities during that time. Prior to moving to the city, Heck was the chair of Equality Virginia, the state’s leading LGBTQ lobbying organization. He works as a climate and weather researcher at UW-Madison, and says his priorities will be on thoughtful and sustainable development, including a focus on affordability, mitigation of issues related to climate change, modernizing the transportation infrastructure, and the creation of a neighborhood dog park.

The spring elections saw LGBTQ milestones in other parts of the state, too. Eau Claire residents elected Laura Benjamin, a local entrepreneur and business owner, to the city council. Benjamin was the fourth of five new members elected, out of a pool of 10 candidates. She becomes the first openly transgender woman elected to public office in Wisconsin.

Benjamin is a long time Eau Claire resident who is raising her family there. She moved from Minneapolis to Eau Claire in 1999 for college, attending and graduating from UW-Eau Claire. Benjamin says she has been a key contributor to the redevelopment of downtown as a member and marketer of the Pro-Confluence Committee: Voices for Growth.

Her campaign focused on creating increased opportunities for startups and entrepreneurs, improving wages and job opportunities especially for recent graduates, transparency in local government, and advocating for “diversity, tolerance, and LGBT rights, so that everyone has equal access to opportunities to succeed.”