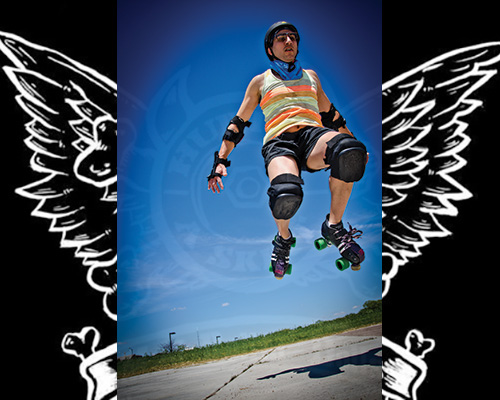 In the fall of 2012 I had a revelation: I am transgender. I identify as a non-binary trans* person tending toward the more feminine end of the gender continuum, an identity that shifts the more I’ve been exploring my gender expression and presentation.

At first, I only told close friends and sought out therapy. I dug for trans* narratives that didn’t follow the pattern of “I’ve always known” or spending childhood evenings praying that God would turn me into a woman—because I did neither of those things. I was a nerdy boy, with religious immigrant parents, who knew he didn’t really fit in with anyone but the other social outcasts in grade school. That’s not to say that those other narratives aren’t just as valid, but personally I couldn’t find anything to which I could relate.

I happened on roller derby around the same time. I had a few friends involved with the Mad Rollin’ Dolls (MRD) league in Madison who took me to my first bout. Even though my skater friend ended up breaking a leg that night (she’s better now!), I was hooked. Even at that first game, derby seemed like a really queer-friendly place that took all kinds, old and young, short and tall, fishnets and full athletic garb. I wanted to find some way to get involved with the league. Getting on skates seemed the most exciting of these prospects, so I went the path of becoming a referee, which is open to all genders.

The second time I was on skates was during Baby Dolls, MRD’s summer boot camp. Really fast people whizzed by me as I shook in my (skate) boots, which were, I found out later, much too big for me. The whole four-hour assessment went by like a blur, but my favorite part of that experience was when I had to do two laps of backwards skating around the track. At the time, you might as well have asked me to levitate around it. It took me an eternity to do a single lap, but all the other skaters chanted my name while I was doing it. That’s the first taste I got of the loving, supportive community that is roller derby.

I didn’t end up skating with Baby Dolls that summer but instead started with the Mad Wreckin’ Dolls (or as we call ourselves, the Wreckers), the recreational league affiliated with MRD. Although originally intending to train as a ref, the more I got involved with Wreckers, the more I realized how important of a space derby was becoming for understanding my gender identity. Wreckers take all sorts, from seasoned athletes to shaky first-timers. It’s an environment of full support.

Having amazing leaguemates and the environment they fostered allowed me to become more comfortable expressing my femininity in a semi-public place, and the community made me realize how much I wanted to play the game.

Some of the work around  trans* issues and policies in derby undertaken by the Trans, Gender-Non conforming, and Intersex Athletes Network encouraged me to send a timid email to the Wreckers executive board, asking what the policy would be for non-binary trans* folks playing a sport in a league that has traditionally been for those who are female-identified. The board was more than receptive, and we’ve been working to draft and implement a gender policy that is more inclusive. Encouragingly, similar discussions are now playing out within MRD and the Women’s Flat Track Derby Association, the largest governing body of roller derby leagues in the world.

I can’t say that I’m not conflicted about pushing for the inclusion of non-binary genders within roller derby. We live in an incredibly patriarchal society that constantly puts unrealistic expectations and limitations on women and what they can do with their own bodies. Establishing a women’s-only space can be empowering, liberating, and a truly feminist act.

At the same time, I believe that it’s completely in the spirit of those feminist ideals to establish a space that accepts non-binary people who want to be accepted into a dominantly women’s space. Roller derby is the first sport that I’ve played in which I’ve felt incredibly confident and good about myself and self-image. I wrestled in high school but was driven out by a coach who was the embodiment of hypermasculinity. While derby isn’t without its warts, it’s practically free of the kind of gross machismo with which I’ve had to deal in male-oriented sports.

My leaguemates have been incredibly supportive and are some of the most impressive and strong people I’ve ever met, on and off the track. Derby’s the kind of sport where you try dearly to beat the crap out of your best friends, then go out and sing karaoke with them, brag about the bruises they left you, cry in their cars, and hug it out.

At a time in my life when I’m continually unsure of my body, vacillating between abhorring it and celebrating whatever kind of femininity I can manage to express, roller derby has helped me to take the utmost care of it, to eat well and drink less, to cross-train regularly, to treat myself to days of self-care and love. It’s made me realize more and more how amazing my body is and to what extent I can push it. I’m proud to be a part of this community.