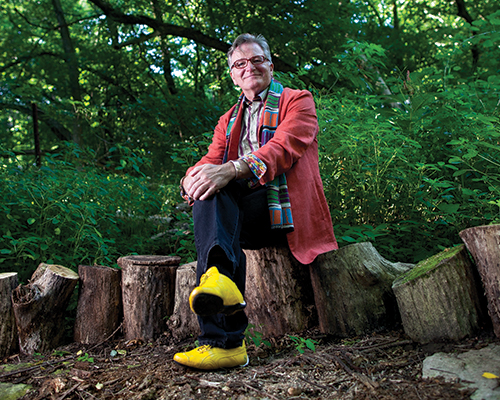 Reinventing my life is harder now than it was when I was younger. Last fall, due to legal/political concerns outside our control, I had to announce the closing of Edenfred, the arts residency of the Terry Family Foundation, two weeks before I was speaking about our success at the national conference of the Alliance of Artist Communities. The residency was my brainchild, creation, dream job, living art installation, embodiment of a philosophy about integrating art into the community, and my home. I’ve been oddly adrift since its closing in December.

A Dialog with My Younger Self

I don’t like writing about myself. As a visual artist, the personal is processed into other forms that reflect the viewers’ perceptions as much as the artist’s—it’s an unspoken communication. First-person narrative is daunting. I began to prepare to talk about my arts career as advice to my younger self, listing tips, maxims, significant experiences, and insights that have helped me along the way. By doing this, I realized how listening to my younger self (and writing this) is crucial as I reinvent and define how to move forward.

Life Lessons Along the Way

I grew up in a Wisconsin dairy farm, fundamentalist Christian family; I was involved in 4-H, band, choir, drama (bad ham actor in leading roles), forensics, and Badger Boys State; I was a general over-achiever as I figured it was my ticket off the farm and out of the small town. Not liking farm life from early on, reading was my escape. I wanted to be like the people in books. Two days after graduating from high school, I was a bellman at a second-rate Jewish resort in Elkhart Lake. The rube from the farm began his education about the world. Take-away: “To thine own self be true.”

I started college as a theater major. I realized I was never going to be tall and chic, so short and agile would have to do. Exploring lots of subjects, I felt I was being a good parrot but not truly learning anything. I quit after a year and a half. I became part of a more experimental program in which I designed my own degree in Cultural Analysis and began to make visual art. My final undergrad year was spent also working full time as an advisor to others planning independent degree programs. Take-away: Listen to your deeply felt, internal voice to make decisions; do not be afraid to take risks; be ambitious; develop an ability to succinctly summarize long meetings and bring them to a point of decision—this is incredibly valuable and gives one power.

Fast forward through a series of jobs and experiences as an artist-in-residence, an art programs coordinator, a gallery assistant, an undergrad art background for grad school, creating collaborative sculptures and costumes for dance, organizing and curating exhibitions, and attending grad school in installation sculpture in Los Angeles.

One of the ways I put myself through grad school was working as a life drawing model (yes, nude). Since I knew art and had some dance training, I was fairly creative at poses and the work was fairly lucrative.

One evening I arrived and saw a note on the board that the instructor was going to be late, so I changed and began directing the class that we’d start with some one-minute poses and they should do gesture drawings to loosen themselves up. After a few of these, a student asked if I was going to be the teacher. When I asked, “Why?” he responded that someone had come into the room and said that the teacher was ill and wouldn’t be coming. I called a two-minute pose and decided, “Why not? It’s introductory life drawing, first class of the semester, what do I have to lose? If I don’t, my trip will be wasted and I won’t get paid.” I directed the class from the model podium, would then put on my robe and do a round of individual critique, return to the podium, shed the robe and proceed. In retrospect, it was quite empowering. And the college offered me a teaching job the next semester. Take-away: Learn to trust and float with the universe; if I can teach a class while naked in front of it, I can do anything!

Fast-forward through the freeway flier years—cobbling together a freelance living and a few full-time gigs: making and exhibiting installations; teaching; running galleries; curating art exhibits for academic, public, and commercial galleries; working for other artists and as preparator for a private art museum; working as associate director of a contemporary gallery; working as a consultant to an open Native American art gallery.

One dreary, rainy day in Santa Monica (there aren’t many, but there are some) when no one goes out, a couple came into the gallery and I engaged them and began showing them around. There were several works in a back hall that they spoke about as possibilities for a specific place in their home, but didn’t agree on which one or two they thought might work. The gallery owner was completely ignoring them because they weren’t recognized clients and no one but novice lookers would be out on a rainy day. As I chatted with them, telling them about the artist, processes, and referents, they decided that since they couldn’t decide on two that they would buy all five and gave me a credit card to process the sale as they continued discussing the artworks. When I returned to the desk with Vidal Sassoon’s credit card and a sale of five paintings, you can imagine how quickly the owner jumped up to schmooze the new favorite clients! Take-away: Do what you are passionate about; never assume anything about anyone; administrative and people skills are the most essential, with aesthetic skills close behind; never burn bridges or networks; helping people learn how to look at, see, and want to live with art they feel challenged by is very rewarding; fully live YOUR life.

Fast forward through parents taking turns having heart attacks; my subsequent return from LA; an art installation exorcising childhood sexual abuse experiences (UW-La Crosse and the UW Memorial Union); creating public art projects with collaborative artist group FIELDWORK; jobs/projects with Madison Symphony Orchestra, WI Academy of Sciences, Arts & Letters, Madison Museum of Contemporary Art, Design Gallery at UW-Madison; creating Bach Dancing & Dynamite Society stage environments; freelance consulting to open contemporary gallery in Portland, ME, and design historical museum for Idyllwild Arts in California; freelance work in Madison as wearer of many hats. Take-away: Do not underestimate your skills; do the therapy to dump your baggage (or at least get it down to the size of a day-pack); build your community by doing what you do best and sharing it with others; believe in yourself and do what you believe in.

In 2003, I was asked if I’d be interested in helping the Terry Family Foundation create an artists residency program. To be given the opportunity to create one’s dream job is a rare opportunity, and the Edenfred arts residency was the result. I created many community partnerships, a multi-faceted residency program, and an environment dedicated to supporting the creative work of artists of all stripes—writers, playwrights, poets, film-makers, visual artists, composers, musicians, and choreographers. Edenfred also became a nexus for exchanging and developing ideas via “Conversations” for arts curators and choreographers and “Imagine,” an effort to begin to understand our regional creative ecology. Professionally rewarding, personally enriching, and embedded within the community, the residency was my living, breathing art installation helping artists manifest ideas in the world. Take-away: Recognize opportunities and develop them; work to make your dreams real; everything you do is truly in partnership with others.

Then, it was my job to bring it all to a close with the same attention and care invested in the creation. The residency had become a community asset and there is as much responsibility in dismantling something as there is in building it properly. This was perhaps the most difficult thing in my career because my professional responsibility was divorced from my personal feelings and emotional investment in the residency. Only after closure could I fully allow myself to feel personal anger, grief, and despair. I took a month off and haven’t been very productive for the last six, though one night I ironed every shirt in my closet. Travel has been helpful to develop a new perspective.

Career paths are winding journeys. Those in the arts even more so, always subject to political and economic fluctuations and to public perception and misperception. My path has been filled with deep, rich experiences and relationships, incredible opportunities, and the trust of others. Being chosen by Our Lives for this issue has prodded a reflective conversation with my younger self and reminds me to trust the universe, keep dreaming big, and to reconnect with the invincibility of teaching a class naked. Take-away: I can’t see around the bend at the moment, but there are opportunities waiting for me just ahead.