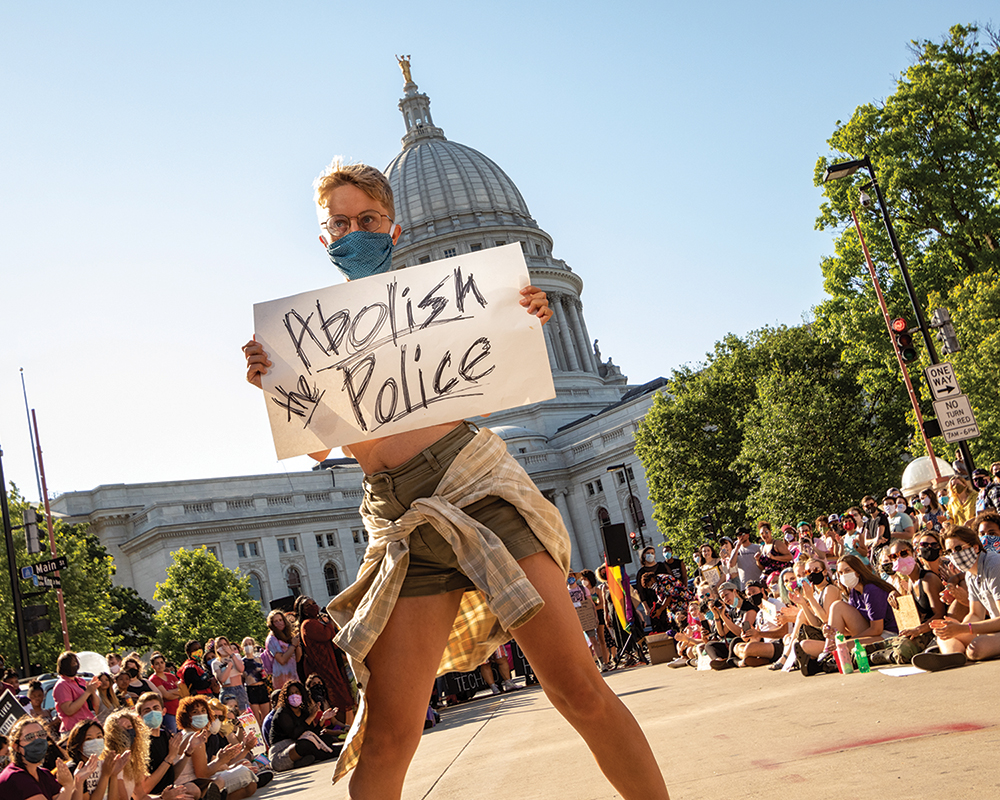 Amid a global coronavirus pandemic, Wisconsinites are making a lot of sacrifices to help slow the spread of COVID-19. Since Governor Evers declared a State of Emergency on March 12 and Safer at Home orders on March 24, LGBTQ+ businesses and community groups had to close or cancel while living with daily uncertainty about what the future held.

In addition to the queer-friendly third spaces where we can gather and socialize, Pride month as we know it in June became be a study in the evolution of community, uprisings, and solidarity.

Milwaukee Pridefest was one of the first and the largest Pride events to be canceled in Wisconsin. In early March, Pridefest organizers originally chose to postpone the event. As other event cancelations were announced into the fall of 2020 due to the uncertainty around large gatherings and the future of safer-at-home orders, Pridefest was officially canceled by mid-May.

Pridefest President Wes Shaver says there aren’t plans to try to make the event virtual this year, but organizers intend to sponsor and support other events when people can gather safely. Diversity in their line-up will continue to be a priority, but organizers will also be having conversations about the presence of police in future Milwaukee Pride events.

OutReach LGBT Community Center’s Magic Pride Festival is now being held virtually on August 16. OutReach had a successful event last year when Pride in Madison changed from a parade to a picnic in a park. The last parade was held in 2018 when the LGBTQ+ community was starkly divided over whether to permit Madison police officers to participate. Looking back, it was a prophetic debate.

Even with a virtual event, OutReach is optimistic that between income from sponsorships and the decrease in costs and logistical effort required to hold an outdoor event for 5,000+ people, things may even out. Center Director Steve Starkey notes that because the planning of the event comes from board leaders like Dana Pellebon and from community groups, the August event can still be a fun and safer way to celebrate.

Two other popular events in Madison were also canceled. There won’t be a Woof’s Pride block party in August, however GSAFE asked for the bar’s popular meat raffle fundraiser proceeds to be donated to Freedom, Inc.

Fruit Fest will keep evolving after several years of change. Once a block party hosted by LGBTQ nightclub Plan B, it made its first shift to become an LGBTQ music festival after new ownership rebranded Plan B as Prism. With the influence of nightlife organizer Lili Luxe, the event returned to more of a diverse, LGBTQ+ mission. After the closing of Plan B/Prism and competition for both physical and calendar space, event organizers looked for an alternative location. At the same time as the pandemic forced a shutdown, organizers were in negotiations with Breese Stevens Field (home of the Forward Madison Football Club). Now, with more time to plan, the event could bring in more sponsors, more diversity in participation, and potentially secure Breese Stevens as its new location.

Though the state Supreme Court struck down Governor Evers’ Safer at Home order and as Wisconsin’s economy slowly grinds into its new normal, the future of events and our third spaces remains unclear. At the time of this writing, positive cases of COVID-19 are hitting new daily total records in Dane County, as the spectre of pandemic-related closures continues to loom large.

The murder of George Floyd in Minneapolis by police created yet another name to add to the list of Black men, women, and trans/non-binary people killed by police in America. His murder is galvanizing a new generation of activists who say that police, who are guaranteed a qualified immunity from murder charges, are a part of a law enforcement system that does the opposite of serve and protect our community’s most vulnerable.

The call for accountability and reevaluating the role of police sparked protests in cities around our state and nation, including massive marches locally in cities as large as Milwaukee and as small as DeForest. It’s not a coincidence that direct actions in support of the Black Lives Matter movement in Wisconsin have been led by queer and trans Black leaders, primarly women. They say that the same unjust system that fails to protect Black trans women from violence also creates state-sanctioned murder at the hands of the police.

In Madison, groups including Freedom, Inc., led a major march on May 30 that closed all of downtown, including the site where Tony Robinson was killed by MPD officer Matt Kenney, who still is employed by the MPD. The march ended, but protestors lingered and rioted, breaking storefront windows on State Street and looting stores. Police in riot gear responded with pepper spray and tear gas. A curfew was issued by Mayor Satya Rhodes-Conway, and several nights of conflict with police ensued.

For several weeks, Freedom, Inc. not only led marches and direct actions, but also held online education sessions aimed at explaining why they wanted to defund police, gain community control over police, and why the queer roots of pride and the history of civil rights in America have always been intertwined.

In Milwaukee, thousands of activists gathered at the Henry W. Maier Festival Park on Sunday, June 7 in solidarity with those protesting the police murder of George Floyd. It was also an act of reviving the Pride Parade that was originally scheduled to take place that day, and transforming it into support for the Black Lives Matter movement.

With a Facebook event created just days before the gathering, Broderick Pearson, known in Wisconsins’s queer nightlife as Montell Infiniti Ross, organized the March with Pride for Black Lives Matter. “It really came from the frustration I was having about not seeing much from our Milwaukee Pridefest or Pride Parade committees putting anything together, or even taking the opportunity of using what would have been our Pridefest weekend to make a statement in support of the Black Lives Matter movement,” Pearson said. “I reached a point where I was like, if it’s not going to happen, then why don’t I just use what I know and put it together on my own?” Speakers at the event included local non-binary musician Lex Allen, trans rights activist Elle Halo, and Chair of the Milwaukee County Democratic Party Chris Walton. Rally speakers talked about how much the Black Lives Matter movement and the movement for LGBTQ+ equality have in common and the urgency to address police brutality.

In Madison, Pride for Black Lives was a street protest turned drag ball. The protest rally on June 12, hosted by Freedom Inc., Our Lives magazine, OutReach LGBT Community Center, the Party for Socialism and Liberation, and Urban Triage, began where most rallies do on the Capital Square at the head of State Street. Freedom Inc, beside local drag performers led the protesters from the square to the courthouse with chants and speeches. Ending on Martin Luther King Jr. Blvd, the protest became a dance party with drag and musical entertainers of color, Kilo aka Skitlz, Anya Knees, MettahDroid, Cyrus K. Stratton, and Jasper Madison. UW-Madison Gender and Women’s Studies professor, Dr. Sami Schalk, was the emcee who called the drag ball where dancers embracing their own “Protest Realness” showed off their moves down an impromptu runway in the middle of the street.

The events in Milwaukee and Madison show what happens when the history of the Stonewall riots and the social unrest of today push the LGBTQ+ rights movement into a more equitable space. That push played out most visibly in Los Angeles.

Black-led groups, however, weren’t consulted and when they learned that CSW would be coordinating with police on logistics, Black leaders spoke out about the problems with working with the very entity they were protesting against. The march ultimately happened on June 14 under the leadership of Black leaders in the Black LGBTQ+ Activists for Change organization. But the disagreements in planning the march put a spotlight on long-standing failure of gay, white leaders in centering and lifting queer and trans people of color.

Pride will look different in the future

If the experiences of people of color weren’t truly prioritized in Pride celebrations in the past, they will be in the future. There’s a reason why we’ve had mixed feelings about celebrating the decision by the U.S. Supreme Court’s decision barring employment discrimination against LGBTQ+ individuals, or by the symbolism of raising the Pride flag over the Capitol this year. It was ethically challenging to celebrate and draw attention away from the urgency and momentum of the Black Lives Matter movement.

White queers and allies have an opportunity to step aside and let that momentum pave the way for leaders of color to continue the work for equality and justice that began at the Stonewall Inn. When white queers and allies stop centering themselves, Pride can be transformed into events, education, and a movement for more equitable inclusion.

This summer, we’re celebrating signs of progress, from the positive SCOTUS decision about employment discrimination, to seeing more companies and government buildings flying rainbow flags in support of the LGBTQ+ community, and more of us running for office or serving in powerful political and judicial positions. But we are also experiencing an historic moment where we have an opportunity to lift up the leadership of Black queer and trans people, embrace the Movement for Black Lives, and let our solidarity reflect the true diversity of our community.