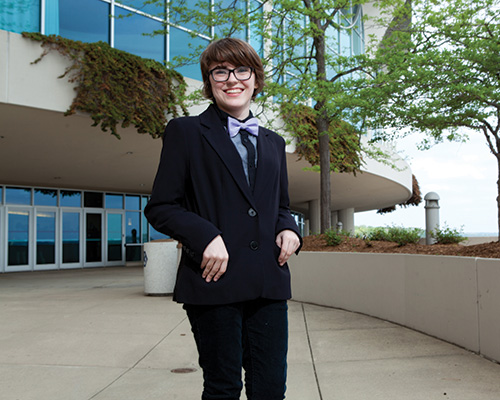 Had you told me a year ago that I was going to be asked to write about youth leadership, I would have laughed in your face, or at the very least called you mean for getting my own hopes up. Sure there was this long-haired queer kid who wanted to change the world, but I didn’t think I had the guts, especially considering even phone orders to Pizza Hut were something I avoided on a regular basis. The most advocacy I did was writing PSAs on my blog and correcting others’ pronoun usage.

However, I learned something within the last year—that my very existence, my being transgender, nonbinary, asexual and panromantic, along with so many other identities and parts of myself—is an act of advocacy within itself. For someone who has ever been marginalized, everything they do is advocacy, including acknowledging and embracing their own sense of self. Coming out of the shadows, making your own voice heard, and assisting others in having their voices be heard as well, is advocacy.

A year ago I didn’t know this, but here I am now, with a GSAFE Celebration of Leadership Scholarship under my belt, articles I’ve written on various areas of advocacy for my school newspaper, blogging and tweeting about the injustices of the world, and taking a few naps in between.

I began the first steps of helping to have my town, Fond du Lac, recognize transgender people by leading their first Transgender Day of Remembrance, educating others on what it is to be transgender, and even by being the first out transgender contestant in the yearly Mr. Fond du Lac pageant hosted by the Fond du Lac School District.. I also had the chance to help lead the middle school visibility and education days, where district eighth graders learned about gender, sexuality, oppression, and how words and phrases can hurt others. I turned my visibility into power, and advocacy into education and acceptance.

In all honesty, it’s hard to talk about my own achievements because there is so much I could still do and have yet to do. I would like for my former high school to implement change and include transgender and gender nonconforming youth in its anti-discrimination policy. I would like for medical gatekeeping of treatments for transgender people to be abolished. I would like for the statistics for homeless LGBT youth to not be so overwhelming. I want the injustice in the world to stop.