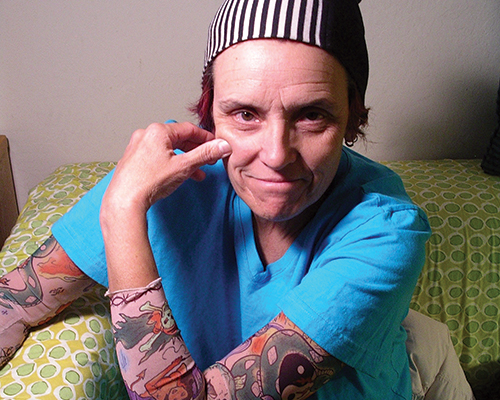 Max White has forged an enviable life for herself as a widely exhibited artist and a full professor of art. She has maintained a 13-year long-distance relationship with her partner while keeping one foot in Madison and the other in San Francisco. How does she do it all? “It’s not easy,” the self-identified nonconformist says, when asked about her accomplishments.

White grew up in Cape Ann, Mass., and completed her schooling on the East Coast. She received her BA from Colby College in Maine and an MFA from University of Pennsylvania-Philadelphia. Soon after graduation, she landed in San Francisco and moved into a one-room-storefront-queer-artist-co-op. Several influences, including punk, street queer, Buddhism, and the clouds molded her into an eclectic artist and teacher. After decades of living a fulfilling counterculture lifestyle, she seems almost bewildered to admit that home is now a near-east-side flat in Madison on a tree-lined street, with two cats who greet her every time she walks through the door.

Her art runs the gamut from “physical to metaphysical.” The physical is represented by a strident hard edge that is maintained throughout her body of work and includes lines of energy, emotional-but-direct colors, and manipulation of ink and textures. The metaphysical is depicted in pieces like “The Fire Within,” a monotype that some viewers may read as a landscape, but actually depicts a more internal mindscape.

Since 2000, Max has lived in Madison and taught art at UW-Whitewater. Academic confinement can be stuffy for those who, by their very nature, poke air holes in the status quo just so they can breathe. Max concedes there are challenges, but despite them she has excelled in her position at Whitewater and was recently promoted to full professor.

The reality, she points out, is that the experience of teaching in a university has afforded her many artistic freedoms and career opportunities. A quick glance at her curriculum vitae reveals project collaborations with other feminist and LGBT scholars, learning trips in China, and teaching trips in Oaxaca, Mexico. She clearly has academic freedom when it comes to developing her courses, too. The intaglio unit she created for Introduction to Printmaking is titled “Living the F Word, From Ms. to Bitch: Reflections on Feminism Today.”

Max’s identity as an artist is inseparable from her overall being. The same rebellious spirit that she embodied when she took on San Francisco in the ‘90s is what continues to push her into new artistic territory to this day. Twenty-some odd years ago, she was producing promotional graphics for lesbian and feminist journals in the Bay Area, for everything from Off Our Backs to On Our Backs. Her current work looks at “the intersection of sensuality and spiritual experience.” Beautiful bodhisattvas, those who self-sacrifice their one path to nirvana to help others attain happiness, float above the tables in the Winnebago studio she shares with another artist.

Max White has long lived authentically. She is a strong feminist grounded in the intersection of art, life, education, and open expression. She continues to build upon her many accomplishments and push herself artistically. Fortunately, for those who admire her work and for her students, like a modern bodhisattva, she brings us along the way.

Karin Wolf is the arts program administrator for the City of Madison Department of Planning and Community and Economic Development and the Madison Arts Commission. Her freelance arts writing has appeared in Sculpture Magazine, Public Art Review, and the Milwaukee Journal Sentinel.